There is nothing more striking about this World Cup than the sight of Maradona in the costume of ‘the establishment’. 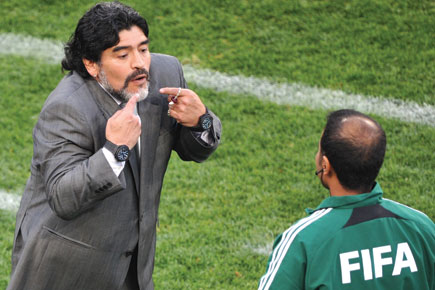 There is nothing more striking about this World Cup than the sight of Maradona in the costume of ‘the establishment’.


When Argentina secured a berth at the World Cup after a great deal of struggle, Coach Diego Maradona asked journalists, who had been critical of him, to “Sigan chupando” (suck it). ‘Sigan chupando’ became a popular ringtone in Argentina.

Even his morning routine is touched by the bizarre. He doesn’t shave these days because his pet dog, a Shar Pei, bit him on the lip. New toilets were fitted into his suite at the High Performance Centre in Pretoria because the earlier ones were not up to his standards. There were no bidets. Bidets, which are armed with water jets that do all the cleaning at the press of a button, leave the ‘Hand of God’ unsoiled for worthier tasks.

Naturally, Maradona has been the World Cup’s biggest attraction yet. At least till the time the tournament produces its own stars, which it will. Never in football history was the emergence of the coach from the tunnel as awaited as Maradona’s at Ellis Park, where Argentina opened their campaign against Nigeria.

He looked a bit anxious as he stood behind his players in the passage, swaying slightly, chewing gum, hands across the chest. The beard did not throw us off. He has sported it before. The suit was more surprising. Maradona is a proud prole. He hates people who wear suits. He has criticised Pele, Franz Beckenbauer and Michel Platini, the current UEFA boss and his only rival in the 1980s, for “putting on a tie and joining the establishment”. But everyone grows up at some point, even Maradona who turns 50 on 30 October. Besides, he is truly thankful for the chance to be part of the World Cup experience again. The suit appeared to be his way of showing respect to the event that confirmed him as a footballing god.

Also, he himself has a weakness for ties. In the 1990s, on a visit to Paris to announce his plans for a players union, he squeezed in a trip to the Versace store in Fauborg St Honore to buy shirts and ties.

Usually, when the teams line up, the cameras face them. At Ellis Park, it was different. Some of the photographers turned their backs to the players and zoomed in on Maradona. He sat on the edge of the bench, for a while not meeting the eye of the lens. Then he did, and smiled. Within moments, he was on his feet. He is a restless man who once even escaped from hospital at great risk to his life.

As far as strikers go, Argentina are spoilt for choice. Javier Zanetti and Esteban Cambiasso would have given them solidity at the back. Maradona, with characteristic lack of logic, did not pick them for the squad and has been criticised for the decision. But against Nigeria, with Gabriel Heinze’s goal, Messi’s wizardry and Maradona’s own theatrics, everything was forgotten, even the comical goof-ups of Jonas Gutierrez, pressed back into defence from his usual midfield position. Maradona stood at the edge of the field all match, like parents along the rim of a swimming pool. He was expressive as usual, eyebrows arching, shoulders lifting and dropping. He argued with the officials, kissed his players. He even deigned to become ball boy when the Jabulani rolled out of the pitch and came his way. Maradona scooped up the ball with that famous left foot and into the hands of a waiting player. It was a moment Maradona, the ball and the player all seemed to be waiting for.