For the Biggest Home Run Ever

Baseball has touched base with India through the efforts of a talent show in America. But will it catch on? 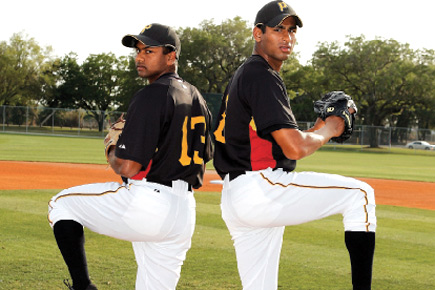 Baseball has touched base with India through the efforts of a talent show in America. But will it catch on?

Both Singh and Patel are from working-class backgrounds in Uttar Pradesh (UP)—Singh is the son of a truck driver, and Patel was raised by a maternal uncle who makes a hardscrabble living in the struggling handloom industry—and were enticed by the show’s biggest prize: $1 million.

Before the competition, Singh and Patel were batchmates at Guru Gobind Singh Sports College in Lucknow, where they were training as javelin throwers with the ultimate goal of landing a financially stable career in the military. It was here that Patel was given the idea to try turning his arm into a million dollars. “A coach of mine in India said this show was coming up,” Patel says, “He said that if you could throw a baseball hard, they would give you money. That’s why I went to try.”

Their pluck paid off. While no contestant reached the $1 million prize, Singh displayed an accurate fastball that averaged around 90 miles an hour, an ability that earned him $100,000 and a trip to California to train with a professional pitching coach. In addition, Patel also displayed enough of an arm to receive $2,500 and an invitation to join Singh on his baseball odyssey.

Of course, neither man had ever played baseball in his life—and the vast majority of their fellow contestants hadn’t either. American sports agent JB Bernstein, the creator of the show, was well aware of that fact, but he was looking at a much bigger picture than one reality show. He was hoping that the show would crack open a potential goldmine of hidden baseball talent in a nation of more than one billion people. Just as the signing up of China’s Yao Ming by the American basketball team set off a wave of interest in the sport in that country, The Million Dollar Arm could spark off an Indian fascination for baseball, felt Bernstein and others.

And besides, huge swathes of the globe—Japan, Korea, Australia, Canada and Latin America— have already taken to the game with enthusiasm and talent. Bernstein didn’t see India’s cricket mania as a problem. In fact, he hoped to exploit the similarities between baseball and its close cousin (some might say father), where fast bowlers routinely top 140 kmph with their arms.

“I’m always looking for new talent,” Bernstein says, “I was watching a cricket game with my partner, and I turned to him and said, ‘Do you think any of these guys could throw a baseball?’ The next thing I know, we’re in India working on the show.”

The movers and shakers in the American baseball world seem open to the possibility of an Indian revolution. After working with their American trainer for six months, Singh and Patel staged a tryout in November in front of dozens of scouts from Major League Baseball, the sport’s highest professional level in the US. Although the two youngsters didn’t dazzle their suitors, they pitched well enough to earn minor-league contracts—albeit very small ones—from the Pittsburgh Pirates.

“The Pirates are committed to creatively adding talent to our organisation,” Pirates General Manager Neal Huntington said after the contracts were signed. “By adding these two young men, the Pirates are pleased to not only add two prospects to our system but also hope to open a pathway to an untapped market.”

Since early spring, Singh and Patel have been ensconced at the Pirates’ minor league training camp in Bradenton, Florida, continuing to hone their skills on the baseball diamond. Their immediate goal is to land a roster spot in the Rookie Gulf Coast League this summer. After roughly a year in the US, the American pastime and American life are growing on them.

“All the people here are very friendly, very good to us,” Patel says of his coaches and fellow players. “They help us a lot. If we make a mistake, they teach us how to fix it.” That includes learning English. When they first came to the US, neither player spoke much at all, but with continuing English classes—and an addiction to the ESPN show Baseball Tonight—both are gradually becoming wordsmiths.

Strangely enough, although Bernstein might have been looking for cricket players when he created The Million Dollar Arm, neither Singh nor Patel was all that big on India’s passion. “I like baseball better,” Singh says. When asked why, he gives a very simple, logical answer. “Because I play baseball,” he says.

But both players from India do throw javelin, a pursuit that has given them the type of strong, sturdy shoulders necessary to become steady, reliable pitchers. However, some observers in the American baseball world doubt whether Singh or Patel are anything more than the products of an elaborate publicity stunt—or whether the pair can ever reach the highly competitive Major Leagues.

After all, most professional American baseball stars started pitching when they were barely out of diapers. How can a duo that had never picked up a ball until a year ago compete with lifelong baseball junkies?

Bernstein, however, feels otherwise. In fact, he reasons, Singh and Patel have a distinct advantage over many US-bred players. While American children pick up a lot of bad habits and poor mechanics on the mound as they grow, the Indian players come to the sport as clean slates, ones who can learn the right way to pitch much more quickly than many Americans.

“There are definitely advantages to not playing your whole life,” says the agent, who is working on the second season of The Million Dollar Arm. “They’re learning the physical side of pitching so much quicker.” As a result, he says, Singh and Patel “are fitting in seamlessly” with the American game.

The two players agree that the road has been challenging, but they still retain the ultimate goal: reaching the Majors. “Yeah, of course,” Singh says of possibly reaching that top level, “if we work really, really hard.” For Patel, just the experience of playing professional baseball in America has made the toil worth it. And, of course, the money has been good too. “Right now, we want to try hard and do well,” he says. “It almost doesn’t matter what happens, as long as we try our best.”

But Bernstein believes that the impact this pair can have on American baseball might pale in comparison to the effect their venture can have on the cultural climate between the two countries. “Rinku and Dinesh are really great for their country,” he says, “They are unbelievable representatives for India. A lot of people (in the US) have never met anyone from the towns and villages (of India), the heart and soul of the Indian people. They can really dispel a lot of myths.” “They’re just two really good guys,” he adds.

“They’re showing (Americans) that India is a great culture with great people.” And, Bernstein may well have added, a huge market of sports-on-TV addicts as well.