The march to a famous victory 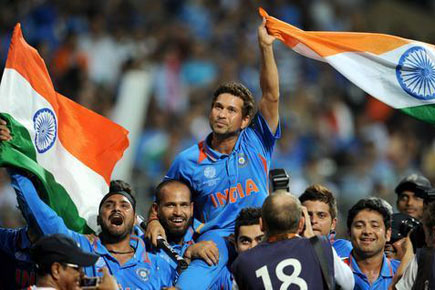 The march to a famous victory


The march to a famous victory

Mahela Jayawardene’s century had helped Sri Lanka to a daunting 274 in the World Cup final against India. Lasith Malinga got Virender Sehwag leg before in the first over. Then Gautam Gambhir, the next man in, tucked Malinga to the leg side for four. Even Sri Lankan fans would have clapped. The four seemed an inconsequential snarl of a small animal at a beast about to gobble it up.

The four, however, was the start of Gautam Gambhir’s greatest innings, if not the most flawless. It was also the start of one of the greatest chases in Indian cricket history. A gift that everyone from Sachin Tendulkar to the man on the street was waiting for was being gradually secured. Nuwan Kulasekara, who dropped Gambhir when he was on a little over 30, must have had a sleepless night.

The recovery that started with the boundary ended with a clattering six over long on by captain and man of the match Mahendra Singh Dhoni. Having promoted himself in the batting order, like Imran Khan in the 1992 World Cup, Dhoni made 91 not out (and time and again blew his nose). The bowler who conceded the last six, again, was the luckless Kulasekara.
Gambhir’s 11 hour Test marathon in Napier two years ago was obviously a longer innings. But it cannot compare with Saturday. This was a far bigger occasion. It was a World Cup final before the imploring terraces of Mumbai’s Wankhede Stadium. After seeming destined to win, India had allowed Sri Lanka an imposing total. Their excellent work over the past month was close to being undone. When Malinga also captured Sachin Tendulkar, India seemed headed for defeat. It was up to the rest of the line-up, for once, to save the match.

Much against expectations, the players, led by Gambhir, showed application. A new age team played old school cricket. Gambhir and his next two partners at the crease, Virat Kohli and Dhoni, mostly ran singles and twos. Gambhir added 83 runs in 93 balls for the third wicket with Delhi mate Kohli, who too batted sensibly for his 35. With Dhoni he put on 109 in 118 balls for the fourth wicket. Both pairs placed the ball well, that too at a good rate, to accomplish a task that had seemed beyond them a mere two hours ago. You thought of Al Pacino’s “Inch by inch, play by play’ speech from Any Given Sunday. The considerable dew at the Wankhede also hindered the Lankan bowlers.

Tendulkar got only 18, but that was from 14 balls. It was important in ensuring that India at least had a brisk start to the innings. The achievement of Gambhir and Co. was in ensuring that this rate was maintained without risks. However, just three runs short of a dream century, Gambhir gave in to a rush of blood. But even without the century, he deserved the Man of the Match award. After all, it was Gambhir who started the turnaround, the greatest in Indian cricket since VVS Laxman and Rahul Dravid’s exploits against Australia at the Eden Gardens in 2001.

“Gautam and I run well, so we could convert ones into twos,” Dhoni said about their strategy. “It was after a long time that we batted together. I remember playing with Gautam for India ‘A’ against Pakistan ‘A’ in Kenya.”
While the batsmen won India the World Cup, Zaheer Khan’s spell was priceless. Though Jayawardene and Thisara Perera ruined his statistics in the end, his opening spell of 5-3-6-1 put pressure on Lanka and somewhat negated their late flourish, when they hammered 63 from five overs.

What a tournament it has been for Indian cricketers. It produced more fairy tales than Hans Christian Anderson ever wrote. Coach Gary Kirsten got the best farewell there could be. Tendulkar got the only feather missing in his helmet. Yuvraj Singh redeemed himself with the Man of the Series award, making important contributions with the bat and ball. He was in tears after the match. Gambhir’s performance will be remembered forever. As will Zaheer’s bowling. Dhoni’s captaincy record is now as complete as Tendulkar’s batting record. He has led India to the World T20 title, the No. 1 Test ranking and now the original World Cup and the No. 1 ODI ranking. “Should you be given charge of the nation,” someone asked him at the press conference.

The match started in bizarre fashion. The coin was tossed. Heads and tails were there. But ears were not. Match referee Jeff Crowe said he did not hear what Dhoni or Sangakkara had said. So the toss was done a second time. Sangakkara got it right.

Sri Lanka do not bat as deep as India. They needed a big innings from one of their top four. Mahela produced it for them. He first held the innings together, relying on his extraordinary placements. Even then, India had their nose ahead. Sri Lanka’s run rate was not great. But Sri Lanka took the batting powerplay in the 45th over and proceeded to a seemingly insurmountable total. It was an explosive finish where Perera was as big a hero as Jayawardene. Their batting temporarily destroyed India’s hopes the way a natural disaster flattens a city.

Dhoni decided to play with Sreesanth, a decision that he would have regretted the rest of his life had India lost. Sreesanth cost the team 52 runs from eight overs. There was no wicket either, of course. He owes one to Gambhir for saving his neck.