‘We were dead broke and we had to call investors to bail us out,’ says Sampad Swain 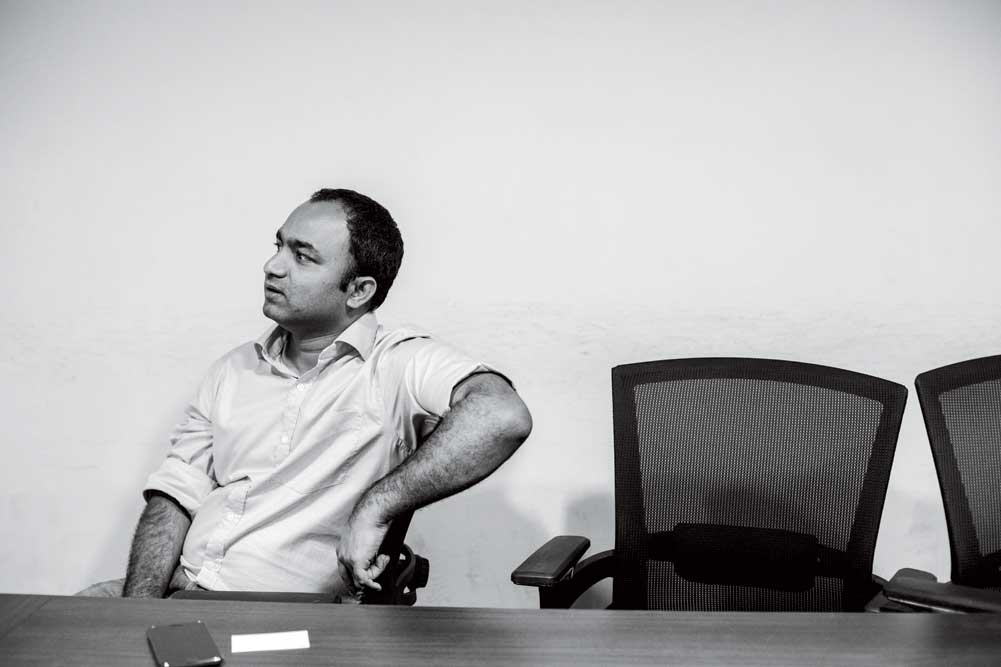 Some of Sampad Swain’s friends don’t yet know whether to commisserate or to celebrate with him. His company, Instamojo, a digital payments platform, may have shut down earlier this year if it hadn’t been for a life-saving cash infusion. He also lost his mother to a bone marrow illness earlier in the year. The manic gloom now stands dispelled by the startup’s miraculous recovery since July, thanks to GST implementation, the fresh round of funding from Japanese payments firm AnyPay and internal cost rationalisation. Instamojo, which has over 300,000 SMEs on its platform and charges about 2 per cent commission on digital transactions made by them, saw a jump in revenue in July and finally broke even five years since incorporation. The company was still running low on cash, however, for a foreign investor had backed out at the eleventh hour in December 2016, citing demonetisation. “We have always been a lean company, but now we had to tighten our belts even more. We cut costs, the founders gave up their salaries, and we worked to increase debit card use over credit card by 15-20 per cent because we get to make three times as much money on debit card transactions. If we didn’t turn a profit, we would wind up. And we nearly did call it off, despite being on the upswing and breaking even. Then the pre-Series B from AnyPay—its debut investment in India—came through, and we suddenly had a lot of money in the bank. Enough, maybe, to sustain us for two years, considering how little we spend on customer acquisition,” Swain, 35, says. “But we have bigger plans. Just payments and estores won’t cut it anymore.”

Founded in 2012 by Harshad Sharma—who is no longer with the company—Akash Gehani and Sampad Swain, Instamojo has been taking it slow in an industry accustomed to whirlwind journeys, raising a total of about $5 million from marquee investors like Rajan Anandan, Kalaari Capital, Blume Ventures, 500 Startups and others. “We are like ducks, calm on the surface while we paddle furiously underwater,” says Swain, at Instamojo’s chatty open-plan workplace, in a building in Koramangala that houses a foot spa. But if you had landed up on this leafy avenue a couple of weeks ago looking for this humble suite of offices, you’d have missed it. “The signboard outside just went up,” Swain says. “It’s symbolic in a sense, announcing that we are here for good.”

According to Y Combinator founder Paul Graham, there are two reasons for a startup failing. One, it runs out of funds. And two, the founders give up. Instamojo should have shut shop, for at a personal level Swain had thrown in the towel, hit by personal tragedy and how hard it had become to raise funds. “In the 100 days before the turnaround, I was rarely in office. I remember telling my mom that it was over,” he says. “Then, suddenly, all the belt-tightening was beginning to yield results.”

On his third business, Swain is an acculturated citizen of startup India, and friends with founders of media-savvy companies that went downhill because of “a case of the magician believing his own tricks”. It’s a kind of treason, pronouncing judgment on one’s peers, and Swain won’t take names, but you can tell he feels strongly about the irreconcilable tension between growth and cash burn. “How many people do you think we are as a company? 100? 300?” he asks. I shrug. “We are 47. Investors don’t always like it. We are misunderstood as a company because we are not a copycat, though we have begged and borrowed ideas from many successful businesses. From using a simple link to enable payments, to setting up over 50,000 estores for our clients, we are now toying with value-adds like GST compliance and lending and logistics tie-ups,” Swain says. “We are growing at 10-15 per cent month-on-month. We are trying to become a one-stop solution for SMEs.”

In the conference room, Swain points an accusatory finger at my iPhone and professes his love for bargains, and we talk about the Flipkart-Amazon price wars and the myth of customer loyalty. So how will Instamojo compete with bigger brands like Paytm, AmazonPay, Mobikwik and PayU for a larger chunk of the business of 50 million Indian SMEs, I ask him. Instamojo believes it has one thing that will set it apart from the others. Big data analytics. “We have data on how our clients transact, what they need, what is stopping them from doing business digitally. We truly try to understand small business. We know, for instance, that 60-65 per cent of our sellers are from Tier II towns while 75 per cent of buyers are in metros. So logistics is a serious problem for them. DHL and BlueDart won’t entertain a call from a seller averaging Rs 50,000 a year in sales, so this is where we need to come in. We will tie up with logistics solutions providers on behalf of SMEs,” Swain says. Lending, cataloguing and GST compliance present similar opportunities for Instamojo.

“It helps that the market they are chasing is only growing and the newest investors believe the company is targeting an underserved segment with a real chance of making it,” says Karthik Reddy of Blume Ventures, which invested in Instamojo in 2013. “The team has incredible sustenance power. Now with fresh capital and renewed enthusiasm, they are building on their steady state, while staying below the radar. They know they don’t need to throw new money at the core business.”

“Instamojo is uniquely placed in India’s payments ecosystem. It is the only company tackling payments, store creation, and going forward, logistics and lending. It could well become an SME powerhouse,” says a VC who does not want to be named.

An Oriya brought up in Kolkata, Swain says he derives satisfaction from helping small- town businesses thrive. “We spend zero on marketing. Our customers are our evangelists. When a houseboat owner from Kerala experiences a painless sign-on at Instamojo, he recommends us to his friends, so we now have a small community of houseboat owners using our services,” he says. Instamojo enjoys a 30 per cent share of its customers’ wallets, a metric it closely tracks. “We are aiming for a million customers and 70 per cent wallet share by 2020,” Swain says.

Even a few months ago, many of these dreams did not exist. “May 2013 was tough, but last year was much more scary. The stakes were so much higher. We had a lot of things going for us. We had never overspent, we had our basics right, our revenues kept growing 5-10 per cent even through the lean months, yet investors looked away. We could not understand the reasons for this rejection. What we have come to understand now is that we were not able to communicate what we wanted to do. Our vision was bigger than they thought it was. We weren’t about to wait it out as just another payments gateway and try to get acquired,” says co-founder Akash Gehani, 33.

And yet, even as possibilities multiplied and a digital future beckoned, Swain wondered if failure was the fate allotted to Instamojo. The company had already come close to losing its mojo twice in five years—in mid-2013 and in December 2016, when it faced cash crunches. On Holi afternoon in 2013, Swain was on a train from VT to Andheri when he got a text from an investor in the Netherlands, Rob de Heus, and his colleague, Thiys Gitmans. They had heard of Instamojo through the prestigious 500 Startups programme that is now mired in scandal after its co-founder Dave McClure admitted to sexually harrassing several women entrepreneurs. They wanted to invest. “It was unbelievable,” says Swain, “I said ‘yes’ and in no time the money was wired to us. It saw us through a rough patch and gave us the support we needed to raise further rounds of funding from Kalaari, Blume and others. Rob has been part of all successive funding rounds— he’s our lucky mascot.”

Last December, Instamojo was practically celebrating ahead of a large round of funding, when demonetisation prompted the investors, who felt they no longer knew the market, to back out. “We were dead broke and we had to call Kalaari to bail us out with another $250,000, which saw us through the next six-to-eight months,” says Swain. “As of this quarter, I can decide if we want to be profitable, but never before did I know this feeling.”

Swain is used to being broke. In December 2011, a week before starting Instamojo, he had Rs 13 left in his bank account. “I borrowed from my wife, who was then pregnant with twins,” he says. He had booked the domain name Instamojo on October 5th, 2010, and Rajan Anandan, MD of Google India, their first investor, liked it so much that he asked where he should wire the money. “Over a Google Hangout, I sketched out the business plan on a napkin. Next thing, Akash and I went to YES Bank in Mumbai in shorts to open a current account,” Swain says.

His first venture, in 2009, was WaNaMo, which morphed into DealsAndYou. Post acquisition by the Smile Group, he spent 18 months in Gurgaon and tried his hand at building a hyperlocal mobile ad network, which never really took off. Aside from his day job, he wrote a blog and sent out a newsletter to a few thousand subscribers. “This was pro bono, but I thought if I could receive small donations from readers who wanted to contribute, that would be cool. But as an individual, it was terribly hard to receive money, you had no say in payments. That’s how the idea of Instamojo took shape.”

Near-death experiences have kept life exciting for the Instamojo team, which has stuck together for the most part. The company is now hiring for leadership positions for expansion. “Failure will become an essential part of your entrepreneurial identity when you are trying to build a brand new road to walk on,” says Swain. “It makes the outcome that much better.”