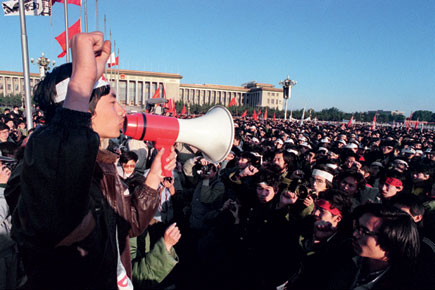 
4 June was the 23rd anniversary of the revolution that didn’t happen. The Tiananmen Square protests of 1989 were a series of popular demonstrations in and near Tiananmen Square in Beijing, which began on 15 April and ended with brutal military suppression.

When the protestors couldn’t be appeased with concessions, party authorities declared martial law on 20 May, and on 3-4 June, military convoys entered Beijing. With orders to clear the Square by dawn, the troops started shooting indiscriminately. The Chinese government has never declared the exact number of civilians killed, but the majority of estimates range from several hundreds to thousands.

Internationally, the Chinese government was condemned for the use of force, and economic sanctions and arms embargoes were imposed. But the government conducted widespread arrests, expelled foreign journalists and has since strictly controlled coverage and public discourse on the events.

This was visible this year as well, when on 4 June, China’s censors blocked internet access to the terms ‘six four’, ‘23’, ‘candle’ and ‘never forget’. Users encountered a message that said the search results could not be displayed ‘due to relevant laws, regulations and policies’. Censors also prevented microbloggers from changing display photos in an apparent attempt to prevent them from posting any picture commemorating the anniversary. The government also restricted the movements of dozens of dissidents and former prisoners.