‘There is no biological basis to race’

Angela Saini dismantles notions of ethnicity and colour in her latest book. The author in conversation with Bhavya Dore 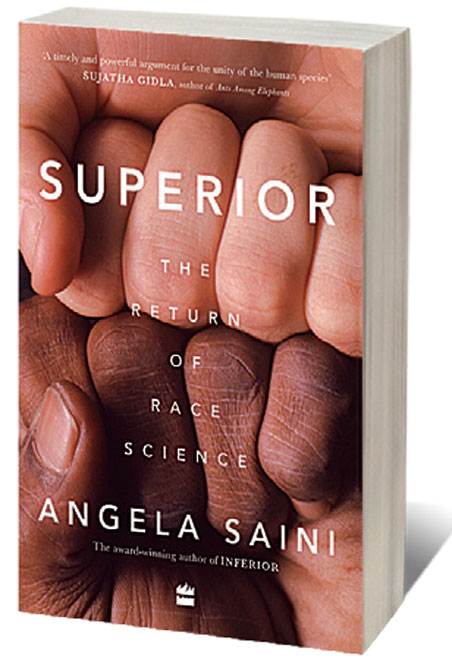 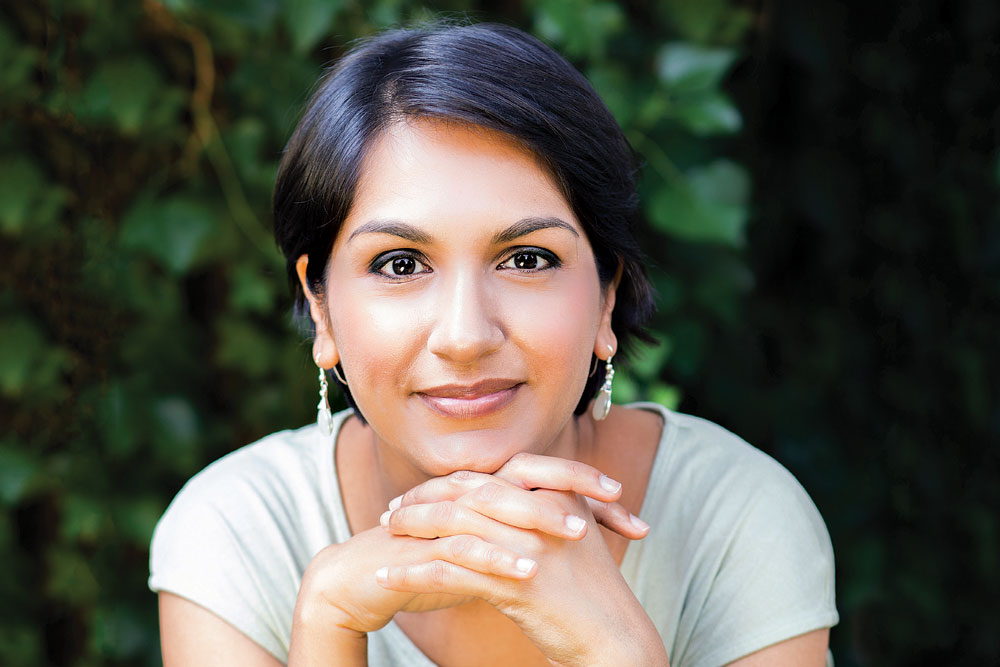 
IS RACE A biological category? What differentiates population groups? And how has science been commandeered by political ideologies to justify one’s own superiority? Angela Saini’s Superior: The Return of Race Science (HarperCollins; Rs 599; 352 pages) asks all these questions, providing insights into how culture shapes science and gets shaped by it in turn. Carefully researched and engagingly written, Saini’s book argues science is not a single immutable truth and it will always be contaminated by researchers’ assumptions if done without self-awareness. She also looks at how ethnic nationalists in the early 20th century deployed science to fuel their own agendas, and how ethnic nationalists around the world today are doing much the same. UK-based Saini, the author of two previous books on science, is a journalist whose work has appeared in the Economist, Wired, New Scientist and so on.

How did you decide to write this book?

It was a topic I’ve wanted to write about for a long time. It became possible to do that because the political climate had changed and there was a revival of interest in this topic. As a science journalist, when I started on this I felt I had some grip on what race was, and by the end that had completely changed. My understanding is so much deeper now. All my assumptions have been overturned.

What assumptions did you have and how did those change?

I live in London which is a multicultural society and race is always invoked in everyday life. When you fill out a census or an employment form, it asks how you define yourself: by race or ethnic group. So continually you are being asked to define yourself by ethnicity or race. We feel we know what race we are and we know how to define it. So I assumed like many others that there must be some biological basis to this idea and that is what has been dismantled in my book. Because there is no biological basis. It’s a long process and it’s not easy to accept, because it feels real to us in so many ways. To have that challenged is actually quite difficult and it can be quite a challenge to your sense of self and identity to learn this is not how human difference works.

If not by biology, how do you define different groups?

The difficulty is in defining groups. There is no such thing as a distinct group. There is no gene that exists in all the members of one group and not in another. The way I like to think about it is about genetic relationship. I, for example, have a close genetic relationship with my parents, my sisters and my child; and a slightly weaker genetic relationship with my cousins, uncles and aunts; and then a weaker relationship still with more extended family. The further away you get, the weaker it gets. Historically, people have tended to live close to their families, so there will be a weak but measurable genetic relationship with perhaps your community. And the further away you get geographically, the weaker that gets. So when you get to the level of a nation maybe you can statistically measure some average differences between one population group and another, but they will be very weak and very statistical. Not all members of the group will be representative. If you test the genome of my White neighbour and my South Asian-origin neighbour, I could have more in common with my White neighbour genetically. That’s how foggy it is. Race depends on where you draw the line. Do you draw it at the line of family? Or the community or the town or the city or the country? You can draw it wherever you want but it’s always statistical and it’s always fuzzy. And it only becomes strong at the level of the immediate family.

The book’s sub-title is ‘the return of race science’. How much did race science go away and how much of a comeback has it made?

To some extent it never went away. These ideas and frameworks have always been there since the beginning of modern times. So the idea of race and how it’s still persisting in science is still there. What has happened in recent years with the rise of populism, ethnic nationalism, religious nationalism, we are seeing a biologising of identity in ways that did happen in the early 20th century, in the 1930s particularly. And that for me is the return of race science in the popular imagination. This idea that what are the meaningful differences between us at the biological level rather than what they actually are, which is cultural and social.


To some extent race science never went away. These ideas and frameworks have always been there since the beginning of modern times. So the idea of race and how it’s still persisting in science is still there, says Angela Saini

How is today’s connection between populism, race and science different from what was there in the 1920s and 1930s?

Well, in some ways it’s the same, so what we are seeing is the resurgence of the idea that we can read human difference in some biological qualities within populations. And we see that partly because of the rise of DNA ancestry testing but also ethnic nationalists have always used this kind of rhetoric. Because of the rise in ethnic nationalism, now they often turn to these kinds of arguments that dominance or superiority is rooted in race. Particularly you see it in White supremacy, a doctrine which says that dominance is rooted in whiteness. If it’s rooted in whiteness then that’s a biological quantity and people who aren’t white can’t claim that. Which is obviously dangerous. It’s a dangerous way of thinking. In the far-right context these ideas are quite widespread but you can see it creeping into mainstream politics as well.

It depends on how you define it and what value these groups have in society. Historically, the way people were defined mirrored the way society was treating them. For example, in the 19th century, [when] European scientists described people in the rest of the world they would often use colour as the grouping factor: Black, White, Red, Brown, Yellow people. This reflected power hierarchies at the time to do with slavery and colonialism and power relationships between people. Not only were they arbitrary—colour is not a genetically uniting force within groups—but they reflected the hierarchies at the time. There has always been meaning attached to these labels and still is.

Did the theory of evolution as humans having descended from a common ancestor not help create a sense of unity among people?

In some ways evolution and the growing understanding that humans are actually very alike genetically (there is less diversity in human species than in chimp species, so we are very alike) have helped reinforce the idea of human unity. It wasn’t always accepted, but now it is beyond doubt. But some people still say humans are different breeds or subspecies; those ideas have not fully gone away.

You write that science will be at ‘the mercy of the personal political beliefs of those carrying it out’. So how do you solve this?

I don’t think it can ever be separated but I do think we can get closer to being objective by recognising our biases, because then we can account for them. I think that’s one reason why scientists need to be really well aware of the history and the context of the work they are doing to understand where their language and framework comes from. Because all of us, in every single society, have biases and assumptions and when we try in our attempt to look at the world objectively, whoever we are, if we are not aware of these, we treat people differently. We think about people differently. And scientists are as guilty of that as anyone.

Can the science be racist even if scientists doing it are not?

I think this is one of the problems we have in scientific research that there are many well-intentioned anti-racist researchers who are looking at human difference but who aren’t always completely aware of the historical context of the work they are doing. And therefore they repeat age-old mistakes when they think about human difference even though they are well-intentioned.

Historically, Western race scientists and eugenicists were fascinated by the Indian caste system because for them it was eugenics in action, says Angela Saini

Does the connection still hold if we replace race with caste?

These are culturally slightly different ideas but in terms of how caste is biologised by some people there are definite comparisons there. Historically, Western race scientists and eugenicists were fascinated by the Indian caste system because for them it was eugenics in action. For them it represented exactly what they wanted to introduce in terms of a racially stratified society.

Not just scientists, but how can the world in general guard against science being used to prop up biased agendas?

This is really hard. Especially online there is such a proliferation of racist pseudoscience now. Even in these fringe journals that are being created. Millions of people are watching and following this body of pseudoscientific work and using it to reinforce their own prejudices and nationalist ideas. And I don’t know how to combat it, because the internet is kind of like the Wild West. It’s unregulated to a large degree. It’s not subject to the same rules that offline society is. In the UK we have rules about hate speech but they aren’t always adhered to online. So it’s a strange situation that we have that our lives are migrating online but online we have a situation where people are saying nonsensical pseudoscientific things. Society hasn’t found a good way to combat that. It’s a real problem. It has political consequences. People start to believe nonsense, like the flat earthers or climate-change deniers.

But do censorship and punitive action against those who indulge in or follow pseudoscience make sense? Because that would raise free speech concerns…

There are many who believe there should be a marketplace of ideas and people should be allowed to air their ideas and you would hope good ideas will win and bad ideas won’t. Unfortunately, that’s not what’s happening. For example, very bad ideas like ‘the earth is flat’ have become popular among segments and they don’t stop believing it. So how do you combat that? I don’t think censoring is enough. They will go elsewhere, they will find people who will agree with them. It’s like a retreat from reason. And it also speaks to the distrust that people have of experts, academics and scientists and that needs to be addressed. Scientists have made mistakes in the past and those things do need to be accounted for in order to rebuild trust in experts. I think it’s a long process and we don’t have answers yet. I don’t want to see a world in which we censor everybody who has a counter-opinion. But I also don’t want to live in a world where crazy ideas like the earth is flat became mainstream and popular. We have to find a solution. 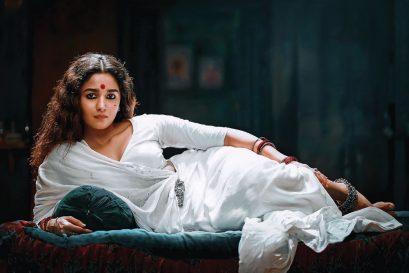 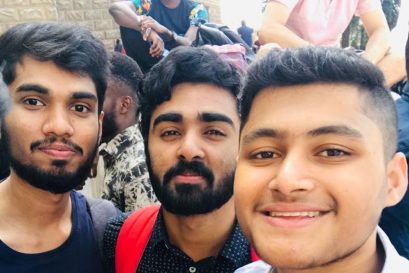