Unlike commodities like edible oils, sugar, wheat or corn, import options are limited in pulses because not much production happens outside 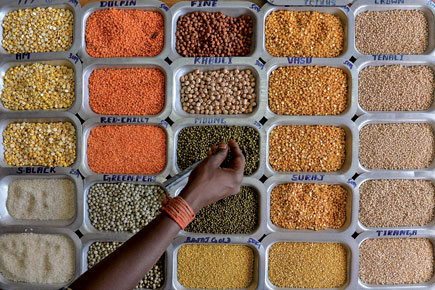 Just as the government managed to curb rising prices of onions, a staple in most Indian diets, pulses have come to haunt them. Retail prices of basic pulses like tur dal (arhar or pigeon pea) climbed to Rs 205 per kilo in Mysore and Rs 210 per kilo in Puducherry, while the all- India average price hovered around Rs 165 per kilo this week, according to the consumer affairs ministry. That’s more than double the Rs 75 per kilo that tur dal cost last year. Urad too is retailing high at Rs 170 per kilo, though it declined from Rs 187 per kilo last week. But rates are still way higher than Rs 98 per kilo that prevailed a year earlier.

The reasons cited are a fall in output due to hailstorms in March this year leading to damage of standing Rabi crops and then a deficient monsoon affecting the Kharif crop. Also, unlike commodities like edible oils, sugar, wheat or corn, import options are limited in pulses as not much production happens outside. The total global pulses output is about 70 million tonnes (mt), of which the estimated cross-border trade is hardly 15 mt—less than India’s annual production of 18-19 mt. Most of the pulses in India are grown in rain-fed areas like Karnataka, Maharashtra, Madhya Pradesh and Uttar Pradesh—subject to changes in the weather.

The government has taken measures to curb prices. It decided to import 7,000 tonnes of pulses earlier this month and a further 3,000 tonnes on Monday, imposed stock limits for traders and even departmental stores, and last week said it would create a buffer stock of 40,000 tonnes. But prices of the two pulses haven’t come down yet.