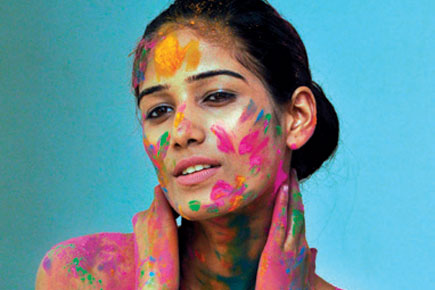 
What is Poonam Pandey? Is it a promise? Is it a hashtag? Is it a pithy way of saying ‘fooled ya’ to the media? Whatever it is, it is genius, and on its way to Khatron Ke Khiladi 4, a reality show. Apart from random pictures, we still don’t know if it truly exists. Kind of like that Raja Ravi Varma movie with Nandana Sen and that topless scene.

We now know that Pandey was hospitalised after Dhoni and his boys bled blue for her. This followed her suggestion that her stripping could motivate the team (“…many studies conducted by various universities abroad confirm such performances boost and inspire people to perform better in any field, be it sports or otherwise”, she told The Times of India). We then discovered that the BCCI had snubbed her when she asked them for permission to strip (‘official stripper of the BCCI’ sounds kinda nice).

Pandey, a Kingfisher swimsuit calendar model, follows @paulocoelho and @celinajaitly, and has over 12,000 followers. Many studies conducted by various interested parties at home also confirm that while she hasn’t yet stripped, there have been tantalising hints she may yet do it, here, in Paris, or wherever. She drops these hints on Twitter in the form of borrowed wisdom. ‘Be content to act, and leave the talking to others. ~BaltasarGracian’, she wrote on 5 April. On 4 April, she tweeted: ‘Thanx a Lot All for ur Support!! I am Still on with My Commitments Stay TUNE :)’ and we stayed tune. She followed it up with, ‘once Steve Forbes said ‘A promise made should be a promise kept. so guys soon will complete my promise just Wait n watch’. Last spotted, she was heard making some reference to Adam and Eve.

Which brings us back to our original question: what is Poonam Pandey? We have a sneaky feeling the answer can be found in a movie called S1m0ne. Pandey, it could turn out, is an idea.