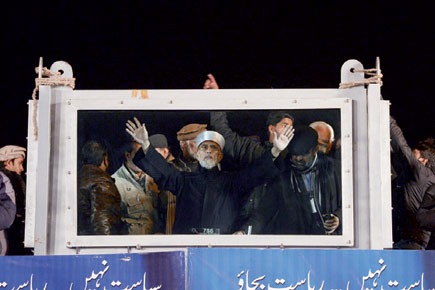 
Cleric Muhammad Tahir-ul-Qadri, who led a large demonstration against the Pakistan government in Islamabad recently, is the head of a religious organisation called Tehrik Minhaj-ul-Quran. He also heads a political party named Pakistan Awami Tehreek. Qadri last got international prominence in 2010, for issuing a fatwa against terrorism.

Qadri is a former member of Pakistan’s National Assembly. He resigned from the post and went to Canada in 2004, where he obtained Canadian citizenship. He returned to Pakistan a month ago and initiated a political campaign seeking the government’s overthrow. His call for quashing the national and provincial governments on charges of large-scale corruption has struck a deep chord with many Pakistanis. He has a large following because of his expansive preaching and educational networks, set up by his organisation in Punjab and nearby areas over the years. Also, his Sufi brand of spiritual philosophy, which meshes modern values with conservative Islam, has secured him a massive support base.

Qadri’s 14 January demonstration was supposed to be a peaceful one, a few kilometres away from Pakistan’s parliament. But according to reports, he incited his followers to storm barricades and move towards a square near the parliament building, leading to a clash with police and paramilitary personnel.

Apart from the dissolution of the incumbent government, Qadri has asked for a military role in picking a caretaker government that will take over temporarily ahead of elections. According to him, such an interim government should be allowed to stay in place longer if necessary to enact much-needed reforms. Many suspect Qadri’s agitation is backed by the army, keen to reassert its power in Pakistan.