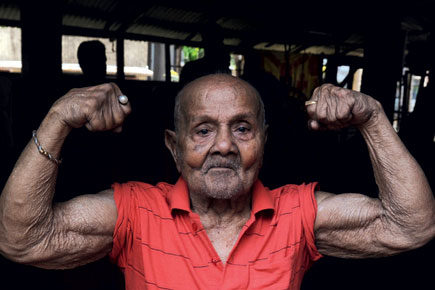 
Last week, ex-Mr Universe Manohar Aich turned 100 in Kolkata. He said that his attitude to worries—he ignored them—helped him live a long healthy life. A diet of rice, dal, vegetables, fish, fruits and milk may have helped as well. Born in Comilla in now Bangladesh in 1912, Aich is also a three-time Asian Games gold medallist. Though he is only 4 ft 11 inches tall (he was called ‘Pocket Hercules’), he made up with impressive dimensions in other areas. At the height of his career, his chest measured 54 inches and waist 23 inches.

Aich was introduced to weight lifting by a colleague in the Royal Air Force, which he joined in 1942. But he took exercise seriously when he was jailed for protesting against the Raj. The authorities were so taken by his training discipline that he was given a special diet. But he was only freed in 1947 after India got independence.

After his release, he and his wife battled poverty to get their kids through school. Aich almost gave up on weight lifting and began doing odd jobs on the side. But his passion never died. His first attempt at the Mr Universe title in England got him the second prize. Determined to succeed, he stayed on in England, took up a job with British Rail, and only returned to India after winning the title in 1952. He became famous and won many more awards, including the Asian Bodybuilding Championships. His repertoire included doing free-hand exercises with up to 100 repetitions per set. When that got boring, he bent steel with his teeth, spears with his neck, and rested his belly on swords.

Aich also mentored some greats. He has helped produce India’s eight-time national champion, Satya Paul, while another protege, Premchand Dogra, scooped the Mr Universe title in 1988. As he turned 100, his only regret was he never met fellow Mr Universe winner, Arnold Schwarzenegger.