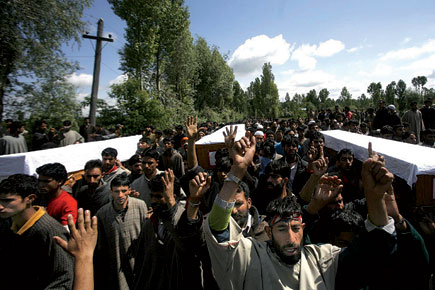 Fake encounters usually lead to debates—for the way they’re conducted with due process thrown to the winds, the violation of human rights, the institutional cover-up, etcetera. But sometimes there is justice. In what’s known as the Machil Encounter, the six Army personnel responsible for killing three young men in 2010 had their life sentences confirmed earlier this week by the Army’s Northern Command. This is also said to be the first case in the Valley in which soldiers have been awarded life terms on such a charge.

In April 2010, Shezad Ahmad, Riyaz Ahmad and Mohammad Shafi from Nadihal village of Baramulla were promised good money and jobs as porters. The men who lured these youths to Kalaroos village in the Machil sector near the Line of Control included two counter-insurgency agents and a Territorial Army jawan.

However, Shezad, Riyaz and Mohammad were killed by soldiers of 4 Rajputana Rifles near the Sona Pindi post and then labelled Pakistani militants. Following a public furore, their bodies were exhumed a month later and identities revealed.

A high-level inquiry commission was constituted by the state government to probe the killings, but its report was not made public. This also led to widespread unrest in the Valley, leading to the death of 123 people. In December 2013, the Army initiated court martial proceedings, headed by Brigadier Deepak Mehra, which issued its ruling last year and the sentence was sent to the Northern Command for confirmation.