Apple cannot afford to keep quiet about this. This is going to be fun. 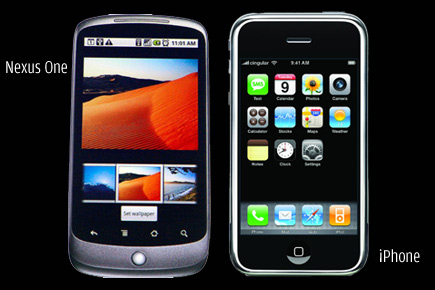 The Nexus One has arrived. Google aims to take on the Apple iPhone and defend its dominance in Internet search.


The Nexus One has arrived. Google, aiming to take on the Apple iPhone and defend its dominance in Internet search, has introduced a touch-screen mobile phone that runs on its own Android operating system. The phone is 11.5 mm deep, slightly thinner and lighter than the iPhone. In a smart re-positioning move, Google prefers to term the Nexus One the world’s first ‘super phone’, and differentiate it from other, conventional ‘smart phones’.

The Nexus One is an important milestone in the smart phone market. This is a software company, frustrated with making compromises with hardware manufacturers, that has taken the product bull by the horns. HTC Corporation of Taiwan makes the phone, but the branding is definitely Google and it’s their idea of the perfect mobile device. Apple cannot afford to keep quiet about this. This is going to be fun.

What else? The second, more far-reaching consequence is that Google will determine both the hardware and software on the phone. Why would this be significant? If you play no role in hardware and driver design, it seriously damages your ability to provide an innovative and instinctive operating system for any mobile device. The Android and the Nexus One super phone are literally made for each other and a superior user-experience. Google is now in a similar position to Apple, controlling the world’s user experience in the mobile world. This is a good thing.

With Nexus One, Google is boosting investments in the mobile-phone market as growth in its search-advertising business on desktop computers slows. Which brings up the most important opportunity for Google, owner of the most-popular Internet search engine: as it sells a phone, developed to its specifications and running its own software (and third-parties’ software), network service providers will gravitate towards it and work with Google to provide offerings designed for the Nexus One. Or else, Google is well positioned to bypass them and get into the voice communication business, a move that would indeed put the cat among the pigeons.

For the time being, Google is being very quiet with the marketing of this landmark device. But the buzz is out and my feeling is we’re in for some paranormal activity in the mobile space. Mind it.