A flash flood has often come and gone (leaving behind a trail of destruction) before the victims can do anything substantial about it. 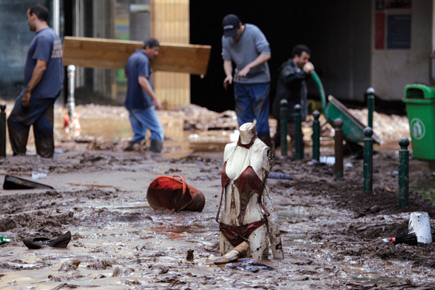 A flash flood has often come and gone (leaving behind a trail of destruction) before the victims can do anything substantial about it.


On 20 February 2010, the wine-producing, wine-swilling and wine-exporting Portuguese island of Madeira was devastated by flash floods brought about by strong winds and heavy rains that lashed the holiday destination located in the mid-Atlantic ocean. Television pictures showed muddy streams coursing down narrow channels and spilling over the sides, roads awash with water and streets littered with debris. For all practical purposes, it looked like a flood, so why did the BBC and the rest of the world choose to refer to the natural disaster as a ‘flash flood’?

To understand the difference between a ‘flood’ and ‘flash flood’ we need to first properly recognise what a ‘flood’ is. Put simply, a ‘flood’ is an overflow of water on to normally dry land from an existing waterway, such as a river, stream or drainage ditch. It is a much longer term event than a flash flood and may last days or weeks. Crucially, a flood is comparatively easier to deal with. A flash flood, on the other hand, has often come and gone (leaving behind a trail of destruction) before the victims can do anything substantial about it.

Like the unfortunate folk of Madeira, the people of Mumbai, too, have experienced the ill-effects of being caught in a flash flood, that is, a flood caused by heavy or excessive rainfall in a short period of time, generally less than six hours. Mumbai, like Madeira, is a clutch of islands with more than a few areas prone to flooding in a flash. Flash floods are usually characterised by raging torrents (after heavy rains) that rip through river beds, low-lying basins, urban areas and the like (even mountain canyons), sweeping everything before them. They can occur within minutes or a few hours of excessive rainfall. They can also occur at other times, for instance, after a levee or dam has failed, or after a sudden release of water.

Many people underestimate the dangers of flash floods. Most carry the mistaken impression that the inside of a vehicle offers robust protection. On the contrary, more than half of the fatalities are ‘people in vehicles’. As little as two feet of water can prove sufficient to carry away most SUV-sized vehicles. The recommended method of saving yourself from a flash flood is to escape, and not outrun, outdrive or cross it.