Like all of its minorities, the Christian population is in decline in Pakistan 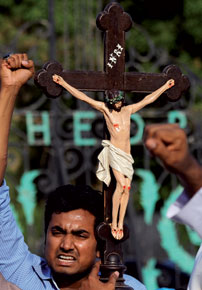 Like all of its minorities, the Christian population is in decline in Pakistan


At noon last Sunday, two suicide bombers barged into the historical All Saints Church in Pakistan’s north-western province of Khyber Pakhtunkwa near Peshawar. A congregation of 500 was gathered there. The terrorists, in their early twenties, blew themselves up, killing at least 81 and injuring 131 others.

Christians, the targets of this attack, comprise only 1.6 per cent of Pakistan’s 200 million population. They live mostly around the southern metropolis of Karachi, Faisalabad and Khyber Pakhtunkwa.

Like in every other British colony, many of Pakistan’s Christians worked in garrison towns during the Raj. They usually provided labour in such urban zones. Even today, Christians are among the poorest of Pakistan. Of course, there are sections in Karachi who are far better educated and work in the corporate sector. They descend from Christians who came over from Goa under the Raj.

Christians in Pakistan have been complaining about increasing discrimination. In 2002, a church in Islamabad was attacked with grenades, killing five people. In 2005, Christian schools, churches and houses were set on fire. In 2009, an enraged mob burnt 77 Christian houses, killing seven people. In 2010, Aasia Bibi, a Christian woman who had a dispute with Muslim women, was accused of blasphemy against Prophet Muhammad. Last year, a court acquitted a minor, Rimsha Masih, the first non-Muslim to get a favourable judgment in a blasphemy case. She left for Canada.

Like all of its minorities, the Christian population is in decline in Pakistan. The wealthier ones are settling in Canada and Australia. Once minorities made up 15 per cent of the country’s population. That has now fallen to 4 per cent. The recent threats from Islamist militants might make things worse.