What the movement reveals about youth, culture and identity 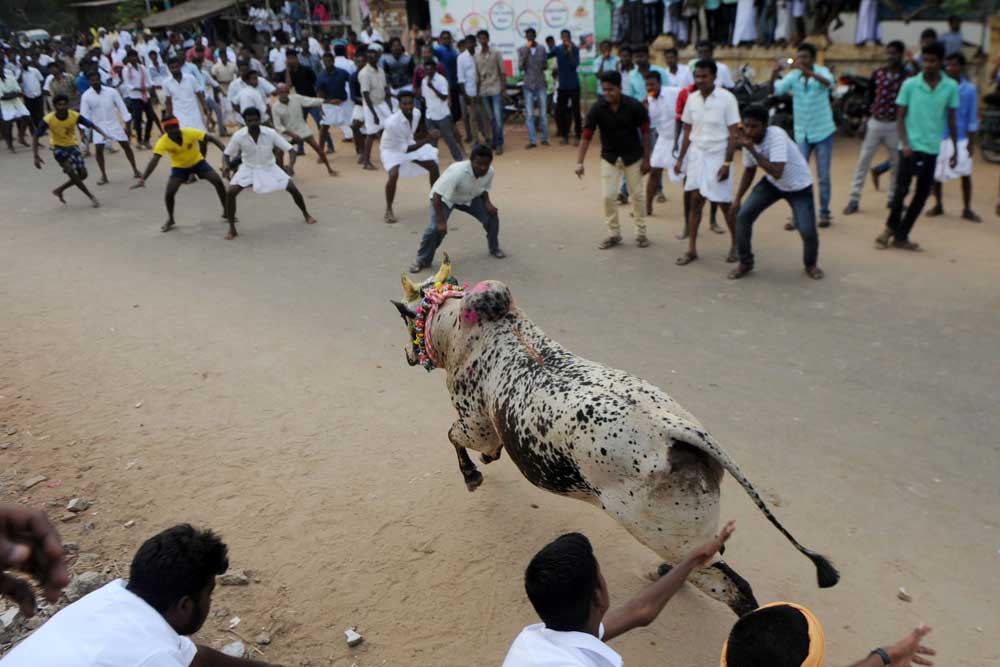 We start on a note of blasphemy. The state-wide celebration of Tamil pride was only incidentally about Jallikattu. A majority of those who plunged into this movement, especially the urban youth who congregated at Marina Beach, were not practitioners of this rural sport.

They were caught off guard by their success. They did not seem to be in any hurry to play. Instead, they began to shuffle and shift the goal posts. What about the Cauvery waters? What about Tamil fishermen hounded by Sri Lanka? What about this? What about that?

This was, sort of, predictable. For them, the aliveness of being in protest was the sport that mattered, driven to this extremity by the boredom and banality of life as it has come to be. One of the functions of sports is, after all, to serve as life’s palliative. Most of us, as Erich Fromm argues in The Sane Society (1955), are on the brink of insanity. But for the opium of TV channels, sports, sex, drugs, a thousand consumerist diversions including cinema and religion, we would run amok, as Eliot’s lady typist threatened to do, ‘with my hair down, so’ (The Waste Land, 1922).

Those of us who still remember the youth unrest of the 60s and 70s of the last century would remember the cry from San Francisco to Tokyo: we have everything to live with, nothing to live for! Aliveness, a sense of being vital and effective, is basic to being young. Aliveness is not merely a matter of zest. It is more, says Viktor Frankl (Man’s Search for Meaning, 1959), a matter of living meaningfully. Meaninglessness is the contemporary pandemic. Boredom and depression are its symptoms.

As a rule, patients cannot understand the maladies that afflict them. The medical establishment thrives on this incapacity, said Plato to the derogation of the ‘noble profession’. In rural areas, shunned by doctors, quacks have a field day. Our national life abounds, alas, with quacks who offer remedies for the maladies they don’t have a clue of. Hence the old saying, ‘Physician, heal thyself.’

What the youth of today need is not smarter phones, jazzier cars, or graded cocktails of indulgence. They need to feel alive. A worthy cause to espouse, a reason to live. They ‘have’. Now they need to ‘be’.

There was a time when sex was a celebration of being. It intuited oneness in the ultimate personal depth. In those days, man and woman knew each other in the sexual union. Jews called it jadoah, or ‘knowing in depth’. No one ‘owns’ or controls depth. Swimming is a metaphor of the precarious dynamism of negotiating depth. The animal experience of sex, Andre Gide insisted, is merely instinctual. It excludes the intimation of depth. ‘After the coitus,’ Gide concluded, ‘the animal is sad.’ It was clearly bestial, if it left you sad and depressed.

Erich Fromm in Anatomy of Human Destructiveness (1973) narrates the instance of a girl who slashed her wrist. When interviewed by her psychiatrist, she explained, “At least by seeing my blood, I wanted to feel that I am alive.”

The pro-Jallikattu solidarity was, understood alright, a spontaneous rallying together of the youth afflicted by the vapidity and emptiness of their life; to create, albeit in a fleeting fashion, a sense of being vital and alive. It is unfair to slur over the dull ache it signifies.

It may seem coincidental that it happened in tandem with demonetisation. ‘A coincidence,’ Arthur Koestler explains, ‘is two events held together by an unseen hand.’ So, there is something that links the two. And we need to see that unseen hand.

If Jallikattu equates a culture with a sport, demonetisation equates—in effect, if not in intent—life with money. It exemplifies the philosophy of Dostoevsky’s Grand Inquisitor (Brothers Karamazov, 1880) that we cannot have bread and freedom. We buy bread with freedom and call it development. When it tastes base in the mouth, we crave for the pickles of the past.

It seems curious that the determined display of pride in a culture is not matched by a keenness to know and live it. It is astounding that the disparagement immanent in equating a great cultural, literary and spiritual tradition wholly with an archaic sport, Jallikattu, is lost on those who are fired with fervour for it. Shouldn’t it matter that identity is hitched to a single quaint custom?

It is nobody’s case that traditions don’t matter in preserving and re-vitalising identities. They do. But tradition is a whole and complex thing. We insult a tradition by equating it with a sliver of it. In grammar, its analogue is synecdoche, or a part standing for the whole. That Tom has a stomach is factually true and unobjectionable. But we’ll insult Tom if we say that he is a stomach. Identity is necessarily polyphonic.

The pro-Jallikattu movement as an enterprise in reclaiming Tamil culture and restoring Tamil pride would have seemed more authentic if it were buttressed by a genuine, mass-based revival of the Tamil culture. It is doubtful if such a revival is underway or in the offing.

Neither identity nor pride can be sustained merely by restoring or reviving the past. Life is lived in the present. The past is valuable to the extent that it equips us to live meaningfully and effectively in the present. Identity is, at best, the past breathing through the present on the curls of the future. The harm in regressing to the distant past is that it blinds us to the opportunities and challenges of the present. This has the ironic effect of degrading identity to a spectral entity. The quest for identity needs to be dynamic. Like how we walk: with the intuition of what is behind, eyes focused on what is ahead and feet planted firmly in the given. To insist that a patch on the path is the whole of the journey is to be unhinged. It is an eccentric piece of escapism.

The boredom that afflicts youth today issues from periodic disenchantment, which according to social scientists, is a byproduct of consumerism. The market thrives on selling disenchantment. The core function of advertisement is to anaesthetise people against knowing that they are buying not commodities but disenchantment. Newer and jazzier variants of the same commodity are introduced year after year not to meet some unmet needs, but to toggle consumers between enchantment and disenchantment. The moment the 2017 model of a thing is introduced, we feel disenchanted with the 2016 model, which was the means by which we escaped our disenchantment with the 2015 model.

Disenchantment betokens rootlessness. We want to stay enchanted. Enchanted, say, by a great idea, a profound movement, the glow of a genius, and so on. It is good to be. What is humanly denigrating is that enchantment is hitched to mere objects of transitory titillation. This hollows out individuals and cheapens culture and identity.

That’s not all. Consumerism co-exists with individual aloneness, which is the opposite of solitude. Solitude stimulates. Aloneness depresses. We seek to belong to the world via the market. But the mall is not home. Thither, you are welcome; but not to belong. Buy. Go home. And the headache is yours, if there’s no home to return to. Languish then in lairs of loneliness. And text yourself into connectivity with a disembodied world—a world of words, not of flesh and blood. The ‘other’ has evaporated from ‘the (other) end’, bequeathing us the syntax of aloneness.

Sadly, this is the ‘development’ we sell to the youth. So, there is supreme irony in the visual on which channels lingered for minutes: tens and thousands of cell phones flashing undulating waves of light, as night settled in on Marina:

From Marina we flash our phones,
The only light you’ve given us.
Won’t you feel our distress, heal our sickness?
Get lost if you can’t; leave us be,
Free to embrace bulls, get gored or adored,
In a brief session, an annual visitation,
When horned aliveness comes charging,
To sport us back to the days,
When love burgeoned on humps of bulls.

‘Pride’ is our word for it, give us one better,
If there’s any that lingers in your lexicon.
Ask us, please, anything but to be
Raw materials for you to shape artifices.
You are not gods, and even if you were
We’d still say, ‘No, thank you’.