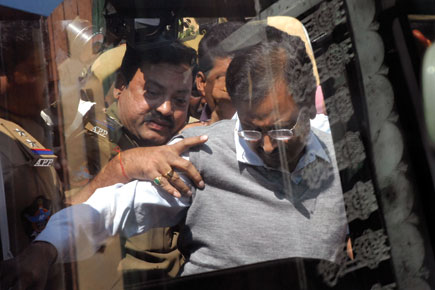 
BANGALORE ~ Besides being a man who cooked up Rs 5,000 crore on a balance sheet, Ramalinga Raju, founder and chairman of the erstwhile Satyam Computers, who took the world’s capital markets for a ride for almost a decade, was also a poet. Except for a brief hiatus, Raju has been behind bars since 7 January 2009. That he had turned to verse surfaced recently, after his wife, Nandini, released a collection of his poems penned during his jet-setting days.

In the foreword to Raju’s book of 56 Telugu poems, titled Naalo Nenu (Me in Myself), his wife reveals that her husband is ‘a highly emotional person’. And during the launch, she even read out some of the lines he wrote for her in their early years of marriage. According to the publisher, Mesco’s Vijay Kumar, the poems were hand-picked by Nandini from among 700 found in his personal diaries.

Flicking through the works, one gets a glimpse of the 56-year-old Byraju Ramalinga Raju’s hypocritical world, where, ironically, he also holds forth on the virtues of  ‘morals and ethics’  in both ‘personal life and business’.

In one poem he writes:

In another poem, he gets metaphysical:

…Oxygen, Carbon, Hydrogen /  Iron, Sulphur, Iodine, Copper, Zinc, Fluoride / Bill all of them together / Add DNA, paste to taste / Put a lid till all grind to a heavenly mix / That is Man.

Mesco first printed 500 copies, followed by another 1,000. “Response for poetry is generally bad. But this title has caught readers’ imagination. It presents a different face of the man who once ran a successful business empire. The poems are about his feelings about the world. Here, one can find the roots to what happened later in Raju’s life,’’ says Kumar.