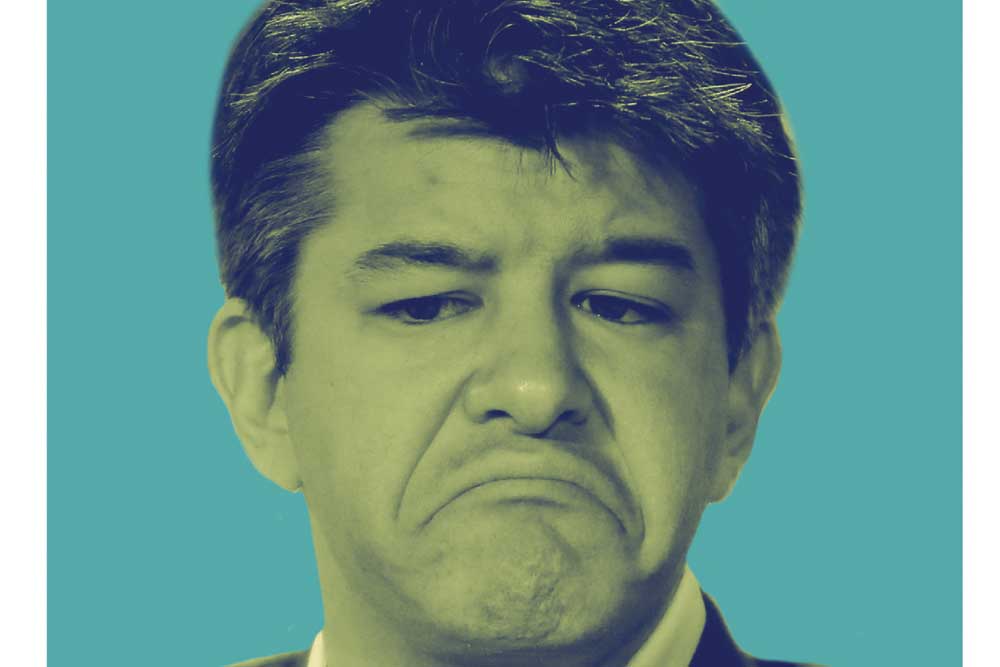 DO MARKET FORCES reward being a jerk? Risking money, yes, as Uber’s tarmac-scorcher of a success story shows. The app arranged cab rides worth $20 billion at the swipe of a screen in 2016, more than twice the year earlier, and raked in revenues of $6.5 billion. Begun in 2009, it has drawn more investor funds than any other tech startup in history, and is valued at $69 billion even before its shares go public. But if anyone deserves a bloody nose for it, it’s Travis Kalanick, 40, Uber’s abrasive boss. So it’s just as well that he’s taken indefinite leave ‘to reflect, to work on myself’, as his exit email says. Just as well? Maybe not. For one, it isn’t entirely voluntary: his stepping aside was prompted by an independent review of the company’s workplace practices that not only reveals a corporate culture almost sickening in its misogyny, it asks for him to be relieved of his charge as one among many remedial measures. For another, his message suggests he plans to return as ‘Travis 2.0’ to lead ‘Uber 2.0’ to greater glory.

Hubris aside, it’s apiece with the sort of grandiosity that envisions an urban idyll of men moving about in magnificent machines, driverless über- wagens under the control of an algorithm that reflects the tech wizardry of Ubermensch 2.0. As if to complete the Nietzschean travesty, Travis had even set down values for a post-self-driven—if not post-divinity—world, at least in office. ‘Always be hustlin’ was an official corporate value, ‘Meritocracy and Toe-Stepping’ held aloft. These sound cute in comparison with Uber’s actual behaviour, be it bullying drivers or jamming rivals, grabbing intellectual property (as Google accuses it of) or winking at affronts to female dignity (as reported). A recent blogpost on sexual harassment by an employee may have occasioned the probe that led to Kalanick’s ouster (for now), but an ugly attitude was exposed back in 2014 by his attempt to shrug off a cab rape in India. News that Uber later swiped the victim’s medical records to discredit her testimony (upheld in court), an apparent bid to back its claim of a rival plot to stall its growth, betrayed a rot even worse.

The irony is that Kalanick puts it all down to his “fierce truth seeking”, as he tells Adam Lashinsky in Wild Ride: Inside Uber’s Quest for World Domination (Portfolio Penguin, 2017). He always dreamt of being an investigative journalist, he says. More to the point, it got him where he is, he’d have you think. By American standards, he had a tough childhood. He sold knives door-to-door, set up a SAT prep business at 18, dropped out of UCLA to create Scour, a file-sharing web service, and after it was legally scotched in 2001, he was so broke he had to move in with his parents (which “sucked”, he once said). It was his next venture, Red Swoosh, that gave him the funds to join Garrett Camp’s cab-hailing idea. As its chief, his war against market rigidities and rivals seems to have coarsened as much as hardened him.

In Wild Ride, Kalanick comes across as a bratty billionaire—his net worth is estimated at $6.3 billion—trying to portray himself as a rare leader who judges himself fairly. Talking about a ‘meme’ that “founder-CEOs have to be assholes to be successful”, he displays the grace to disagree, informs Lashinsky that whether he’s one is among the ‘big questions’ he’ll get from people, and then does some swip-swipe analysis. “I don’t think I’m an asshole,” he says, “I’m pretty sure I’m not one.”