Then Who Killed Aarushi? 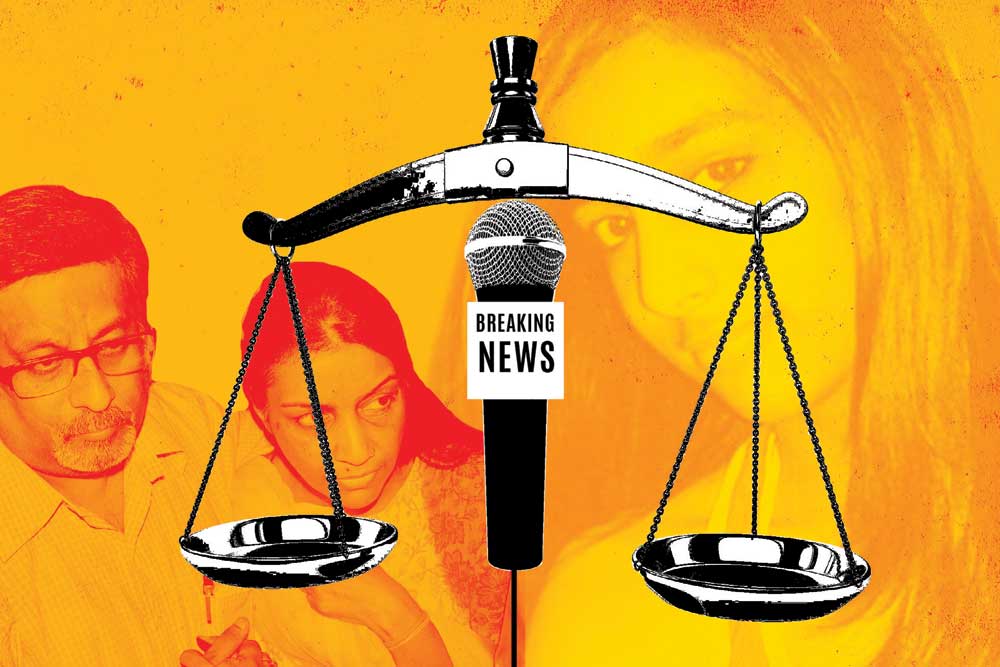 AARUSHI TALWAR WAS 14 years old when she was killed, her body instantly becoming the property of the state and her memories co-opted by the media. Both exhibited scant grace with the responsibility, slandering her and turning the murder into an honour killing—a theory whose basis was the imagination of policemen who found a ready receptacle in the public.

After her parents were released this week, in The Quint webzine, a friend lamented these defamations and remembered Aarushi thus: ‘The Talwars were very gentle and tolerant people. And Aarushi was a really happy girl. She was the simple, kind, peaceful and content one among all of us. I can vouch for this, because I was perpetually in my teenage funk, fighting with my mother, crying about boys, fighting with people at school. Aarushi was the one who everyone wanted to be friends with; she was pretty, fun, kind, friendly, popular, smart and had a very positive and peaceful aura to her; she had really nice parents, she had it all.’

Also, to appreciate how routine her existence was, consider an NDTV clip on YouTube that brings us a school project where Aarushi talks about her life through pasted photographs and writings in a journal:

‘I came into this world on 24th May 1994 in Sir Ganga Ram Hospital. Oh! It must have been such a fabulous day!

I got my first two teeth when I was 5 months old.

In class 3 I was given the role of a honey bee for a role play. I was totally thrilled by it.

In class 5 I received my first scholar badge. It was the most remarkable day of my life.

Now I am here in class 7, enjoying life to its fullest.’

These glimpses of a teenager as a teenager were always there, but conspiracies easily veer to sex whenever women, even 14-year-olds, are involved because everyone craves a fantasy. If Aarushi had died of an ailment, her words would be fond, sad remembrances, but in murder they represent what human evil can undo. Death, when it is unnatural, demeans its victim and not by the murderer alone; the body is nothing but an object of clues, the taking apart of it, the vaginal swabs, the salacious constructs of petty policemen whispered to crime reporters as ‘sources said’ and then fed to a country both salivating and horrified at the same time.

It is understandable horror. Murder is at the apogee of crimes but a child’s murder is even more unconscionable. Plus it was a crime at the highpoint of the television age. Turn to the inside pages of a daily newspaper and chances are there will be equally brutal murders. But most occur in slums and villages—the higher up the class ladder a crime, the more its shock value because opinion in India is shaped by the urban literate. They recognise what society owes them, and, if sufficiently aroused, their voices ring as one. As the daughter of a successful dentist living in the vicinity of Delhi, a child is expected to be safe and secure, especially in her own home. There has to be predictability in the seamless continuation of life, otherwise what is the use of institutions created for this purpose? And when this predictability is jolted, it must be restored by addressing the cause of the disruption.

But what is to be done if some crimes don’t get solved? Justice, a unique human invention, is a pre-condition for a society’s order. Once in a while, however, it is better to accept failure and move on. Rajesh and Nupur Talwar returned home this week, acquitted. They spent four years in jail because a nation was insistent that there must be retribution for their daughter’s killing. The impossible sorrow of an only daughter’s loss compounded by being accused of killing her. Disbelieved because they did not exhibit enough grief in television interviews; for not meeting the kind of yardstick that Bollywood has imposed on human emotions. Because the police fouled up, the Central Bureau of Investigation (CBI) officer investigating the case took a dislike to them and a lower judiciary leant on flawed circumstantial evidence to convict them. They had been planning a surprise birthday party for Aarushi a few days later when she was killed. Progressive and liberal by many accounts, and then suddenly dragged down to the level of a Khap Panchayat in its honour killing. What would Aarushi have made of her parents’ torture?

Even now the refrain goes: ‘If Not Them, Who Killed Aarushi?’, the same question that led to a magistrate ordering charges framed against the Talwars despite the CBI saying it had no clinching evidence. To insist that a murderer must be locked up for this crime is well-intentioned, but, with no answers, it quickly leads down the slippery slope of trapping those who are most easily available. Without the process of law, justice is nothing and gut instinct, a replacement for evidence.

Aarushi would be 23 today, living through the agonies and joys of that age. She shouldn’t have died. Her parents shouldn’t have suffered. Mistakes shouldn’t have been added on layer upon layer until it became a farce and a tragedy. There is a murderer out there who will probably never be caught. There is nothing fair about it, but that is the nature of the Indian condition that Aarushi slipped into.