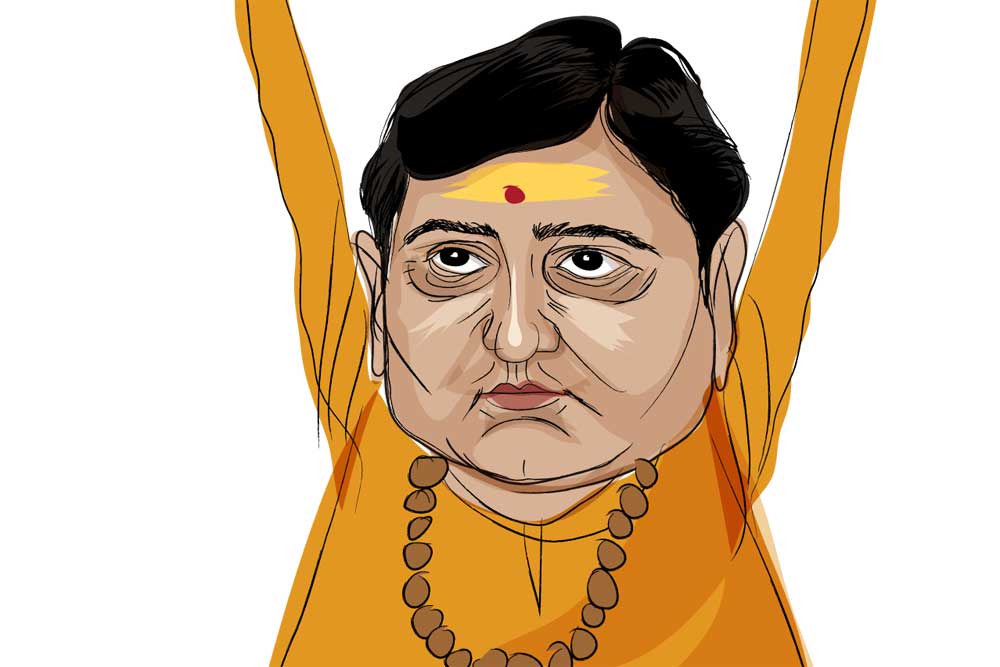 IN DEPLOYING Sadhvi Pragya Thakur Singh as a candidate in Bhopal, particularly against Digvijaya Singh, a Congressman seen to be soft on Muslim terror, the Bharatiya Janata Party (BJP) is honouring its own tradition. At the height of the Ram Janmabhoomi movement, two women, Sadhvi Ritambhara and Uma Bharti, vocalised the anger of Hindus against the ‘Other’. Ritambhara, in particular, through her popular audio-cassette recordings repeatedly invoked Sita to protect Ram, in a clear reversal of conventional roles, and made acceptable the idea of feminine, saffron-clad aggression.

Beginning with the Rath Yatra in September 1990 and ending with the demolition of the Babri Masjid at Ayodhya in December 1992, there were riots and hardening of Hindu-Muslim fault lines. So toxic was the messaging involved in the process that the last Imam of the Babri Masjid entreated authorities to destroy the tapes. “It has built a wall of hatred,” he said.

The hatred was no accident. As scholar Maya Azran has noted in her paper ‘Saffron Women: A Study of the Narratives and Subjectivities of Women in the Hindutva Brigade’, ‘Rithambara’s speeches were repeatedly broadcast at temples across the country, recited at BJP assemblies, and dispersed within the homes of RSS affiliates. Her voice and its message sold on street corners for one rupee. Priests throughout Uttar Pradesh even suspended their normal programmes of recitation from sacred texts at temples to continuously play the cassette.’

Both women were able to achieve this level of appeal because they renounced worldly life. By placing themselves outside the temporal plane, they were able to establish themselves as ‘pseudo- goddesses concerned and saddened by the plight of the entirety of the Hindu nation’, writes Azran. Sadhvi Pragya, who is an accused in the Malegaon blasts of 2008 that killed six people and currently out on bail, belongs to that tradition of the militant sanyaasini who is able to transcend the confines of domesticity within the Sangh Parivar—though unlike Uma Bharti and Ritambhara she belongs to a ‘higher’ caste. Once a member of the Akhil Bharatiya Vidyarthi Parishad, Sadhvi Pragya is also part of the Durga Vahini, the Vishwa Hindu Parishad’s women’s wing started in 1991 by Ritambhara. The Vahini recruits young women for the cause of Hindutva from low-income and/or ‘lower-caste’ families.

The militant sanyaasin has her equivalent in the pracharikas of the Rashtriya Sevika Samiti, founded by Laxmibai Kelkar in 1936, 11 years after the Rashtriya Swayamsevak Sangh. Kelkar invented Ashta Bhuja, the eight-armed goddess who was an integral combination of Mahakali, Mahasaraswati and Mahalakshmi, ‘representing strength, knowledge and wealth, which elevate the nation to a higher plane’, according to scholar Paola Bacchetta in her 1994 paper ‘All Our Goddesses are Armed: Religion, Resistance, and Revenge in the Life of a Militant Hindu Nationalist Woman’. Ashta Bhuja also, significantly, carries weapons in all her hands. Membership in all these organisations is transferrable—Sadhvi Ritambhara, for instance, came up the ranks through the Rashtriya Sevika Samiti before starting the Durga Vahini.

The soldier sadhvis can be traced back to the armed sanyaasis of the late 18th and early 19th century that historian William Pinch has written about. There is some evidence, says Pinch, “that women were involved in or connected to the armed akhaaras in the early modern era, but so far as I am aware there is no firm proof as to the precise nature of their roles”. These were groups deployed by powerful landholding mahants and usually comprised ‘lower’ castes. Prolonged skirmishes between armed sanyasis and East India Company officials led to Warren Hastings’ ban on all ‘bairaagis and sanyaasis’ who were travellers, passengers and strangers in this country (Bengal and Bihar).

Mostly though Hindu nationalism requires women to restrict themselves to their roles as mothers and wives, the Rashtriya Sevika Samiti handbook says: ‘A Hindu woman is an eternal mother, a symbol of love, sacrifice, dedication, fearlessness, sanctity and devotion. The tenderhearted woman becomes bold and aggressive if time demands.’ Gender scholar Sikata Banerjee has identified three kinds of women in Hindutva: the heroic mother, the chaste wife and the celibate masculinised warrior. In all three the woman’s sexual nature is erased. And the emphasis is on naari shakti (woman power) rather than naari mukti (woman emancipation).

In the case of sadhvis, naari shakti acquires almost masculine proportions in its visual representation, whether it be their short hair, clothes or even the relative mobility accorded to them. Sadhvi Pragya’s motorcyle, which was such an important part of the Anti-Terror Squad case against her (though she claims she had sold it four years ago), is an important adjunct to her personality. The emphasis is mostly on women being ‘familists’ (to use a term coined by right-wing writer Mridula Sinha) rather than ‘feminists’. Feminists, as evident in the characterisation of women from Jawaharlal Nehru University (JNU) at the height of the co-ordinated attack on the university, are seen as sexually active. All one has to do to understand this trope is to recall Rajasthan MLA Gyandev Ahuja’s assertion in 2016 that “3,000 used condoms and 500 used abortion injections’’ were among the things found in JNU where, according to him, ‘‘girls and boys dance naked at cultural programmes’’. The distinction they make, clearly, is that between the ‘woman- at-home’ and the ‘woman-in-the-streets’. In fielding Sadhvi Pragya—an unconventional move like the Balakot airstrike— says analyst Arvind Bosmia, the BJP hopes to tap the psychic rage among some Hindus who feel she was unjustly made the symbol of ‘Hindu terror’. With even Prime Minister Narendra Modi referring to how she was tortured in custody (“A woman, a sadhvi was tortured like this, no one raised a finger. I have lived in Gujarat, I understand the modus operandi of the Congress,” he said in an interview to Times Now), there is the additional sympathy vote.

There is also the “reverence for the sadhu”, says scholar Madhavi Menon, that dips into historical memory. Hence the emphasis at her rallies in Bhopal on calling her a ‘sant’—‘boliye Pragya Sadhvi sant hain (Say after me, Pragya Sadhvi is a saint)’, repeats the emcee to the crowd. Added to that is the current problem of not being able to question anything in public that is presented as ‘Hindu’, says Menon. “The idea that sadhus are meant to be removed from the world rather than immersed in it seems completely to pass people by. I’m not sure all this owes to a fascination with the outsider. It seems to owe much more to our fascist-induced public docility—from demonetisation to lynching, the consequences of disagreement are too high.”

And with Sadhvi Pragya painting the contest with Digvijaya Singh as a religious war, the appeal to Hindu voters is unvarnished, unquestioned—and, could it also be, unassailable?