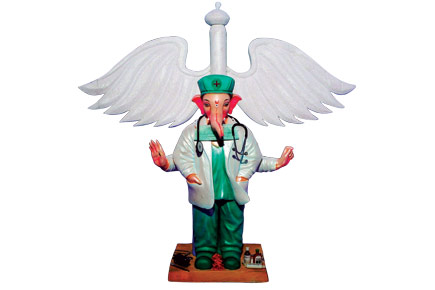 Maharashtra politicians are in a fix over swine flu. Should they wear a mask or just stay away from gatherings?

Precaution seems to have won over for the moment with politicians keeping away from swine flu affected areas. It took several requests from Pune MP Suresh Kalmadi to get chief minister Ashok Chavan to visit his city. Deputy Chief Minister Chhagan Bhujbal too preferred to ‘control’ the situation from afar.

Public appearances and sabhas have been cancelled. Shiv Sena Executive President Uddhav Thackeray was the first to do so. Stating he had done so in public interest as large gatherings would spread the flu, Uddhav also cancelled the inauguration of an exhibition of cartoons of his father, Shiv Sena Chief Bal Thackeray.

Many politicians don’t know what mask to put on. Says a BJP MLA, “If we wear a mask, it will give the impression we are scared. But if we do not wear it, we may get it. Elections are so close and we do not want voters to feel isolated from us.” Kalmadi was seen wearing a face mask.

The big ones from Delhi are also staying away. When the 26/11 attacks happened, everyone from Sonia Gandhi to LK Advani didn’t waste any time flying in. None of them have been seen at swine flu areas despite state unit politicians appealing to senior leaders for a visit to boost the morale of health workers and people.