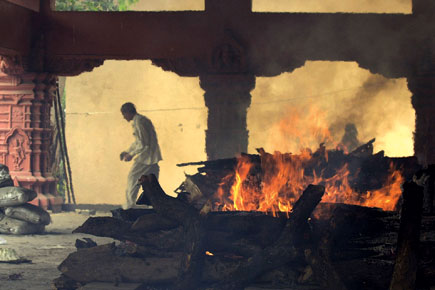 The Brihanmumbai Municipal Corporation (BMC) has decided to stop supplying cow dung cakes to the city’s crematoriums, citing pollution and expense. It also wants to encourage the use of electric crematoriums.

Procurement of cow dung cakes and firewood is costly, and dwindling supply has made the BMC tap faraway locations. The traditional pyre requires 300-400 kg of firewood, 3 litres of kerosene (some prefer desi ghee) and 300-400 cow dung cakes for one body. In contrast, an electric cremation does not use wood and so there are no gas emissions. Firewood and cow dung cakes are given free of charge to crematoriums by the civic body, which incurs a cost of about Rs 1,900-2,100 for each cremation. The rest of the expense—about Rs 1,000- 2,000 more—has to be borne by relatives of the deceased.

Dr Padmaja Keskar, the BMC’s executive health officer, says the conversion of crematoriums to ones fuelled by piped gas will help save resources such as wood and electricity, both of which are in short supply in Maharashtra. “Crematoriums run on piped natural gas will take only two hours to burn the body. Using wood takes up to eight hours,” says Keskar. This will also reduce the wait for a free cremation.

Electric crematoriums don’t find favour with many Hindus who believe the deceased must be cremated in the open for the soul to be released into the sky. The ritual of kapal kriya, in which a bamboo stick is used to break open the skull in the burning pyre to free the soul, cannot be done in an electric or piped gas crematorium. “Cow dung is holy and needed for the pyre. This is a Hindu tradition spanning centuries. Who is the BMC to stop us from using it?” demands Pravin Naik, after attending a cremation ceremony at Chandanwadi.

The BMC meanwhile plans to convert the city’s 11 electric crematoriums into piped gas ones.