Pecos: Of Drinking and Trading 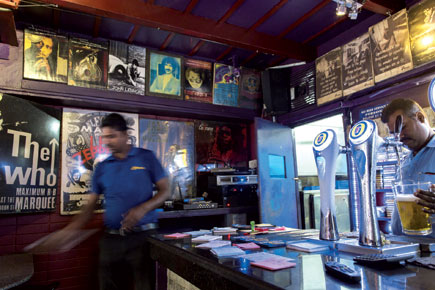 A Well-known pub in Bengaluru, particularly famous for its retro music and atmosphere, has become India’s first bar to be listed on a stock exchange. Pecos, a 26-year-old establishment which became a chain of three pubs in the city, is now Pecos Hotels and Pubs Ltd. It has made an initial public offering at the Bombay Stock Exchange, offering 459 ,000 shares for Rs 50 each at a premium of Rs 40. According to the pub’s founder, Collin Timms, 51, the company decided to go public and raise around Rs 2.3 crore to cover operational costs and expand its chain further.

Pecos started out in 1989 on Rest House Road, off the iconic Brigade road, as a dimly-lit establishment spread across three floors, playing 1960s and 1970s retro rock, and offered beer and casual pub-grub. During this period, its early days, Bengaluru was fast turning into the country’s infotech hub. The pub soon became a sensation with the city’s young workforce. In the last decade or so, more Pecos outlets have opened on Church Street and in Indiranagar. It also opened one at Residency road, but this was later shut. Timms hopes that going public will help the company refurbish the existing pubs as well as enable it to start a new one in Koramangala. “We have been around for 26 years,” Timms says. “The brand can be leveraged for expansion across India in the future.” During 2013-14, the pub chain clocked revenues of Rs 2.92 crore and earned a profit of Rs 8.24 lakh.

While the size of the IPO is small and is unlikely to entice large investors, to its patrons it’s a chance own a bit of Pecos. “Pecos is not the kind of place to impress people but to let your hair down and sing along,” says Sridhar Prasad, a Pecos veteran. Punning on a Pink Floyd anthem, he says, “A Pecos scrip may be as good as owning ‘a brick in the wall’.”