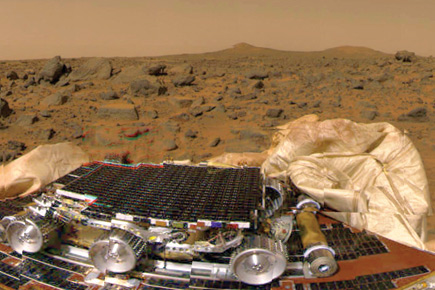 The study of Mars might just get a little easier because of a mineral called Minamiite found in Gujarat.


The study of Mars might just get a little easier because of a mineral called Minamiite found in Gujarat. Formed by reactions among volcanic gases, acid hydrothermal solutions and volcanic/ rock ash, Minamiite belongs to a class of hydrous sulphate minerals which are abundant on Mars but uncommon on earth. Recently, two scientists from the Wadia Institute of Himalayan Geology, N Siva Siddaiah and Kishor Kumar, found it in Matanumadh, a village 80 km northwest of Bhuj. Matanumadh is part of the Deccan Volcanic  Province (DVP), a large tract of west central India made up of lava flows. ‘Further studies on DVP…will provide insights into the interpretation of remote sensing data on Mars [sent back by unmanned spacecraft] including modeling of the planet’s interior and its bulk composition,’ they wrote in a paper published in Current Science.