×
FRIENDSHIP OF THE WEEK

A Bend in the Feud 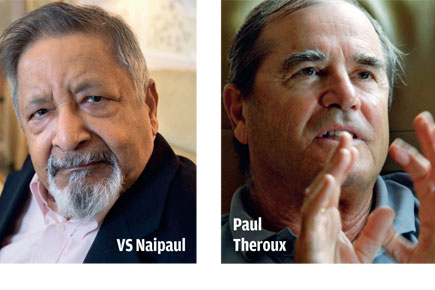 When it occurs, there is little as interesting as a good old literary feud. To witness a continuing row where two adult individuals pursue their grievances by trading insults through finely polished sentences. To find that great minds that brim with the gift of creation are capable of nursing childish grudges and slights through decades.

There have been several great literary feuds in the past. The two greatest Latin American authors of their generation, Gabriel García Márquez and Mario Vargas Llosa, did not speak to each other for more than 30 years after Llosa punched Márquez in a Mexican cinema hall in 1976. The two never explained what triggered the incident, but it has been gossiped to have been over a woman.

Norman Mailer once punched Gore Vidal at a dinner party, and Vidal later retorted, “Words fail Norman Mailer yet again.” The row between Martin Amis and Julian Barnes—once extremely close friends who fell apart after Amis dumped Barnes’ literary agent wife to secure a great deal for one of his books—also unravelled in full view of people at large. Barnes is believed to have written a letter to Amis asking him to ‘fuck off’, and Amis replied, “Envy never comes to the ball dressed as envy…”

In this panoply of literary smackdowns has also been the very public feud between one of the best known writers of the last century and his celebrated protégé—VS Naipaul and Paul Theroux. The two were once the closest of friends but their relationship underwent an incredible souring. When they first met in Uganda in 1966, Theroux was a teacher, and Naipaul, after the publication of A House for Mr Biswas, already an established name. Naipaul took an instant liking to the young Theroux, and took the American writer under his wing. On his part, Theroux even followed his mentor to London, where it is said the senior writer introduced him to the publishing scene in the city. But as the years went by, Theroux became increasingly critical of Naipaul’s writing and views.

Theroux once found copies of one of his books that he had lovingly inscribed and gifted to Naipaul being sold at a rare books catalogue. He later portrayed Naipaul as a nasty, misogynistic individual in his book, Sir Vidia’s Shadow: A Friendship Across Five Continents. Naipaul in return called Theroux an absolute bore who had no views and who pestered him with long letters.

Since then, the two have tried to stay away from each other to the extent possible. And whenever either has run into the other, they have refused to exchange words or acknowledge the other’s presence. In 1996, they reportedly bumped into each other in London. It is said Theroux tried to talk to Naipaul, but Naipaul told him, “Take it on the chin and move on.”

But now, it seems, this literary feud might finally be coming to an end. In 2011, they met at the Hay Festival and shook hands. Some had believed that this was an accidental meeting between two estranged friends who had momentarily forgotten about what all the fuss was about. The reconciliation might be taken a step further in India.

At the time of writing this article on 21 January, both Naipaul and Theroux have been scheduled to participate in this year’s Jaipur Literature Festival. Theroux is scheduled to speak on Naipaul’s celebrated book, A House for Mr Biswas. As Sanjoy Roy, producer of the festival, told DNA, “When Sir [Vidiadhar Surajprasad Naipaul] agreed to come, in fact one of the first things he said was, ‘Please invite Paul.’ And Paul readily agreed to attend the proposed session, although “he stays in Hawaii and is travelling a really, really long way to be here.” All, it appears, is now forgiven.