Why Men Outnumber Women in Maths

Males are not more skilled, they just overestimate their arithmetic prowess 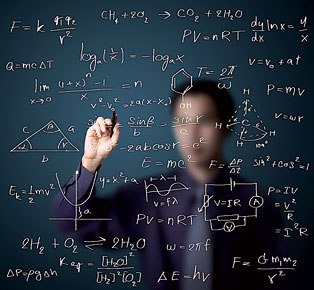 As the common belief goes, men are better than women at mathematics and science. Female students may be increasingly doing as well, if not better, than their male counterparts in these subjects, but the old stereotype continues to exist and also extends itself to technology and science-related professions, where men across the globe significantly outnumber women.

But a new study, conducted by researchers from Washington State University and published in Sex Roles, shows that males tend to outnumber females in these fields not because the former are better skilled, but they believe that they are well equipped to do the complicated mathematics associated with these disciplines.

The researchers conducted two experiments. In the first, a total of 122 male and female undergraduates at the university were made to do math tests and guess their performances. In the second study, 184 participants were asked to take a test without receiving any feedback. They were, however, asked to report their intent to pursue math-related courses and careers.

Across the two experiments, the researchers found that male students tend to overestimate their test scores. Female students in comparison predicted their scores fairly accurately. After the participants in the first study received feedback on their real test scores, the men were more accurate at estimating how well they had done on the second test. The results of the second study show that because the male participants believed they had a greater knack for maths than was the case, they were more likely to pursue math courses and careers than women.

Say the researchers in the journal: ‘Despite assumptions that realism and objectivity are always best in evaluating the self and making decisions, positive illusions about math abilities may be beneficial to women pursuing math courses and careers. Such positive illusions could function to protect women’s self-esteem despite lower than desired performance, leading women to continue to pursue courses in STEM (science, technology, engineering and mathematics) fields and ultimately improve their skills.’