Born in Tamil Nadu, brought up in Baroda and now working at Cambridge, Dr Venkat Ramakrishnan on how his work on ribosomes brought him the ‘fringe benefit’ of a Nobel Prize in chemistry. 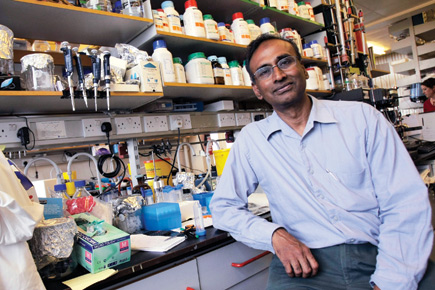 Dr Venkat Ramakrishnan on how his work on ribosomes brought him the ‘fringe benefit’ of a Nobel Prize.


Q What has changed since the announcement—life has become easy or difficult?

A In my daily life, there was a tremendous amount of intrusion in the first few days since the announcement. For many days I kept receiving a steady stream of emails from completely unknown well-wishers, mainly from India. Of course, these people were well meaning and I am not blaming them, but the pile of emails made it difficult for me to find mails that I needed. It calmed down after a while, but I am not used to that kind of attention and it made me uncomfortable. I am getting more invitations for functions but that’s fine because I can decide which ones to accept. My life is returning to normal and it would be completely normal in a few months.

Q You have hit the peak, there is no bigger commendation than the Nobel Prize. What does it do to your motivation? What is next that you want to achieve?

A There is a fundamental misconception that scientists do their work in order to win the Nobel Prize. If they did, they would be crazy. Ninety-nine point nine nine per cent scientists would not get any awards. I think we are far from understanding ribosomes well. There is a lot of work to be done in this field. If you look at previous Nobel laureates, many of them have gone on to do great work after they received the award. It is a fallacy to think that the Nobel Prize is the goal. It is a very nice fringe benefit, if you like. In terms of science, there is a huge amount of work to be done on ribosomes. I will continue working on them in the foreseeable future.

Q Did you know that you will be successful when you embarked upon your ribosome research?

A I was not sure at all. It was a big risk as I was doing fairly well, and I could have carried on doing well, but I realised that it was one of the most important questions in our field. I knew that if we were able to get high-resolution structures of the ribosome, then it would really break open the field. At that time it really looked quite risky and a lot of people advised me not to stop everything else.

Q How much time did you spend in the laboratory at the peak of the research?

A My typical day was about eight to ten hours. Occasionally you have to work around the clock if you are in the middle of something very complicated, but usually I do not last more than ten hours. I get tired after ten hours and when you get tired you make mistakes. I think you should work more steadily and focus on the project.

Q So you do not fit the profile of the mythical scientist who works all night in the lab and forgets his dinner?

A That happens in spurts when you are in the middle of a complicated procedure. But I do not think that anybody can work round the clock for ever. We are humans, we need sleep and other sources of relaxation in our lives. I think it’s a myth that a scientist works all the time.

Q Some people say that the world of science is all consuming. Once you are immersed, it is very difficult to come back to the real world.

A It is true. I may have worked for ten hours but when I went home I did not stop thinking about the problems. Occasionally my family would find it irritating as I would not focus on the conversation, as my mind wandered around problems. I think that kind of obsession is very common with scientists. If you called that work, I suppose you can say that I worked all the time, but that wouldn’t be true as I have many hobbies like reading and movies.

Q After the accomplishment, what do you think you have done for humanity? How will a common person be better off as a result of your research?

A People should realise that advances in scientific knowledge are important for society as a whole just in themselves. It is important to know how some part of nature works even if it has no application. You do not know what application it would have in 100-200 years.

For instance, the laws of gravitation were discovered by Newton in the late 17th century. If you look at rocketry, it uses the same laws of mechanics that he had developed, but it was done about three to four hundred years later. We do not know all the applications, but we know the obvious ones. It will help pharma companies in developing more effective antibiotics, as it is now possible to see things in atomic detail. I am sure there are lots and lots of other applications as well.

Q You worked tirelessly on ribosomes for about two decades. One wonders what keeps scientists like you so focused and persistent.

A The daily process of science can be quite tedious. People have joked that molecular biology is essentially moving small quantities of clear liquids from one tube to another. What keeps people motivated is the knowledge that they are working on something truly important and that if they really make a discovery, it will add to the knowledge base of humanity. The desire to discover and curiosity keep scientists going when things are not going well. I should say that in science 95 per cent of the time things are not going well. I feel that all scientists are essentially optimists. Those who are pessimists leave science.

Q You were born in India, educated and spent your youth in the US and have been in the UK for the last 10 years. How do you see the complicated issue of identity?

A The issue of identity is really complicated. I tell people that I am an American of Indian origin working and living in the UK. But both Indians and Britons, regardless of what I say, take me as an Indian. Britons and Indians can agree on that bit, whereas Americans regard me as American because there your identity is not defined by your ancestry. If you have accepted American citizenship and consider yourself an American, they’ll accept you as one. I think all three countries have contributed to my development. I am happy to be seen as belonging to all three countries. I am not a particularly nationalistic person but I am deeply aware of my Indian roots—there are many thing very Indian about me, like being a vegetarian. A certain core of me will always be Indian, but my attitude towards many things is American and I like living here in Cambridge, so you can see how complicated the issue of identity is.

Q What do you do when you are not working?

A I like quiet activities. I go on long walks and hiking trips with my wife. I like reading and watching movies, listening to classical music. I read English literature, I like Indian writers writing in English because I can easily connect with them.