Microscopic organisms have altered the course of wasp evolution. And perhaps ours too 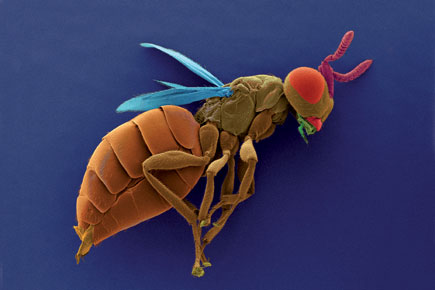 Microscopic organisms have altered the course of wasp evolution. And perhaps ours too


A new study, published in the journal Science, provides what is being considered the most direct evidence of a microbial role in evolution. The study, conducted on three species of the wasp Nasonia, shows that microbes reduce the viability of hybrids produced between males and females of different species.

Two of the wasp’s species that they studied, N giraulti and N longicornis, are genetically closely-related. The two species had diverged only about 400,000 years ago and even their microbiomes were found to be close. The genome and microbiome of the third species that was studied, N vitripennis, however, had greater differences in comparison with the two. This species is believed to have diverged at least a million years before.

To prove that the reason behind these differences in high mortality rates of hybrids is differences in their microbes, the researchers also raised some of the wasps in a microbe-free environment. During the study, they found that the survival rate of germ-free hybrids was the same as purebred larvae. However, when gut microbes from regular hybrids were given to germ-free hybrids, their survival rate nosedived.

According to the researchers, their study provides the strongest evidence to date for the hologenomic theory of evolution. They argue that their findings show that the evolution of a species is dependent not only on the organism, but also its associated microbiome. They write in the journal: ‘Although the gut microbiome influences numerous aspects of organismal fitness, its role in animal evolution and the origin of new species is largely unknown. Here, we present evidence that beneficial bacterial communities in the guts of closely related species of the genus Nasonia form species-specific, phylosymbiotic assemblages that cause lethality in interspecific hybrids.”