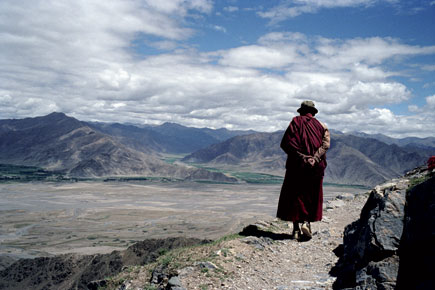 
If you have ever been to the upper reaches of the Himalayas, say Ladakh, then you know what altitude sickness is—crushing headache, nausea and a general feeling that your brains are about to burst. This is because the higher up you go, the lower the oxygen levels. But after a few days, the body compensates for reduction in oxygen by producing more haemoglobin, the element in blood that transports oxygen.

But what about communities who have been living on heights for thousands of years? There were studies earlier with Tibetans, which showed that they did not have more haemoglobin; instead, they had genes which made their bodies adapt. An interesting study called ‘The Genetic Architecture of Adaptations to High Altitude in Ethiopia’ has now found a few more answers. The researchers, three from the US and one Ethiopian, found that the evolutionary mechanism isn’t the same for all high-altitude communities.

They took 260 DNA samples from the Oromo and Amhara communities who live in high altitudes in Ethiopia. There was a crucial difference between the two. The Oromo had migrated to the heights only 500 years ago, while the Amhara had been living like that for more than 5,000 years. The results were telling. The Oromo adapted to low oxygen levels by making more haemoglobin. But Amhara bodies were like that of Tibetans—they did not produce as much haemoglobin, but their genes made the body set up defences against the pathogens created ny lower oxygen. Like an immune system of sorts against high altitude sickness.

The researchers also found that it was not the same gene that did this for Tibetans and Amharans. The online journal E! Science News writes on the paper: ‘When they scanned the villagers’ DNA, the researchers found a genetic variant associated with low haemoglobin levels in the Amhara. This variant was located in a different region of the genome than those previously found to be associated with low haemoglobin in Tibetans. In other words, the physiological coping mechanisms shared by Amhara and Tibetans in response to life at high altitude—ie, dampened haemoglobin levels—are due to different underlying genes.’