Human infants over-imitate even irrelevant steps in doing a task. It distinguishes us from apes. 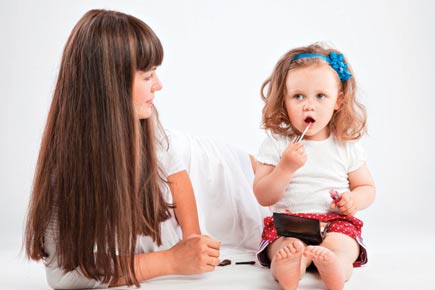 Human infants over-imitate even irrelevant steps in doing a task. It distinguishes us from apes.


Plagiarism seems like a particularly infantile kind of activity, and it is. Imitation is how we learn as children, and if some people carry on learning all their lives, who can blame them? In some form or the other we all plagiarise, but we do look askance at people who step over the line. It turns out that we are all born with a tendency to over-imitate. Mark Nielsen, of the University of Queensland, teamed up with Keyan Tomaselli, an anthropologist at the University of KwaZulu-Natal in Durban, South Africa, to compare and contrast such behaviour in Australian preschoolers and Kalahari Bushmen children of the same age. According to Nielsen, scientists “have been finding this odd effect where children will copy everything that they see an adult demonstrate to them, even if there are clear or obvious reasons why those actions would be irrelevant. It’s something that we know that other primates don’t do.”

The researchers set up an experiment where children were shown how to open a box with several unnecessary and impractical steps thrown in. Children across the two cultures copied all these steps. Whereas if a chimpanzee infant is demonstrated an act, the infant tends to skip unnecessary steps. Nielsen argues that this tendency in humans is, “perhaps not a game, but certainly, when I demonstrate the action, it’s purposeful. So from the mind of a child, perhaps there’s a reason why I’m doing this”. The children then are willing to believe that there must be a reason why the adult, as an intelligent actor, took those irrelevant steps. This recognition of intelligence in others may be one way in which we acquire culture, which often requires us to adopt practices and rituals that seem to afford no immediate practical gains. Nielsen argues, “Really, we see these sorts of behaviours as being a core part of developing this human cultural mind, where we’re so motivated to do things like those around us and be like those around us.”