A better brain is not about size. Social insects with ‘tiny’ brains can perform complex tasks such as counting 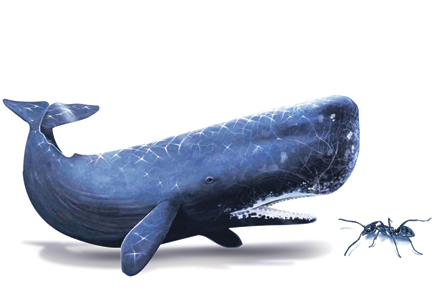 A better brain is not about size. Social insects with ‘tiny’ brains can perform complex tasks such as counting


The question is not as simple as it seems. A whale’s brain can weigh up to 9 kg (with over 200 billion nerve cells) but that does not make it more intelligent than a human being with a brain weighing 1.3 kg (with about 85 billion nerve cells). Lars Chittka and his team at University of London have noted in the journal Current Biology, ‘We know that body size is the single best way to predict an animal’s brain size. However, contrary to popular belief, we can’t say that brain size predicts their capacity for intelligent behaviour. In bigger brains we often don’t find more complexity, just an endless repetition of the same neural circuits over and over… one of the biggest obstacles to correlating brain size with behavioural ability arises when one considers the insects, especially the social ones’.

Take one recent example: in 2006 researchers at the University of Ulm demonstrated desert ants can keep count. Most ants leave scent trails that they follow back to their nest but the method does not work on the shifting desert sands. The researchers attached stilts to the legs of some of the ants, and in what should count as research bordering on the bizarre, they snapped off the legs of some of the ants at the knee joint. When the ants returned to the nest the ones on stilts overshot the mark, the ones with their legs snapped off fell short by the same amount. In other words, the ants were keeping count of the number of steps they had taken on leaving the nest. Chittka remarks that this should not surprise us, ‘Artificial neural network analyses typically show that the minimum number of neurons necessary to perform a variety of cognitive tasks is exceedingly small.’ So what does make for a better brain if not size? The density and flexibility of neural connections may hold the key, Chittka concludes, ‘New neurons recruited into novel pathways and novel brain regions resulting in greater serial and parallel processing of information and links between processing pathways are more likely to contribute more to qualita­tive changes in behavioural performance.’