A chance discovery in a laboratory leads scientists to a blue pigment that is close to perfection. 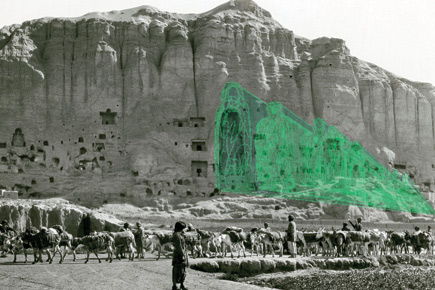 A chance discovery in a laboratory leads scientists to a blue pigment that is close to perfection.


The mines at Sar-e-Sang village in Afghanistan are the main source of the semi-precious stone Lapis Lazuli. For much of its history a great part of the trade in this stone has followed a route through the nearby Bamiyan valley and it is here that the ultramarine pigment obtained from the stone was first used to colour the great Buddha of Bamiyan.

The appeal of ultramarine lay in the brilliance of its blue, but its expense had led many to look for substitutes. Azurite was used by several Renaissance painters such as Raphael, but over the years the blue has faded into a dull green.

Ultramarine was eventually synthesised in the lab but it retains one drawback, a vulnerability to damage from any acidic medium. Other blue pigments have their own problems. Cobalt blue can be a carcinogen, Prussian blue can release cyanide. It was only in the 1930s that a usable synthetic pigment—Pthalocyanine Blue—that overcame most of these drawbacks was first produced.

Now a chance discovery in an Oregon State University department of Chemistry lab may have led scientists to do even better. “Basically, this was an accidental discovery,” says Mas Subramanian, the Milton Harris Professor of Materials Science at OSU. “We were exploring manganese oxides for some interesting electronic properties. Our work had nothing to do with looking for a pigment. Then one day a graduate student who is working in the project was taking samples out of a very hot furnace while I was walking by, and it was blue, a very beautiful blue,” he says. “I realised immediately that something amazing had happened.”

According to the researchers, at about 1,200 degrees centigrade this manganese oxide turns into a vivid blue compound that could be used to make a pigment able to resist heat and acid, be environmentally benign and cheap to produce from a readily available mineral.