Wolves In the Skin of Goats? 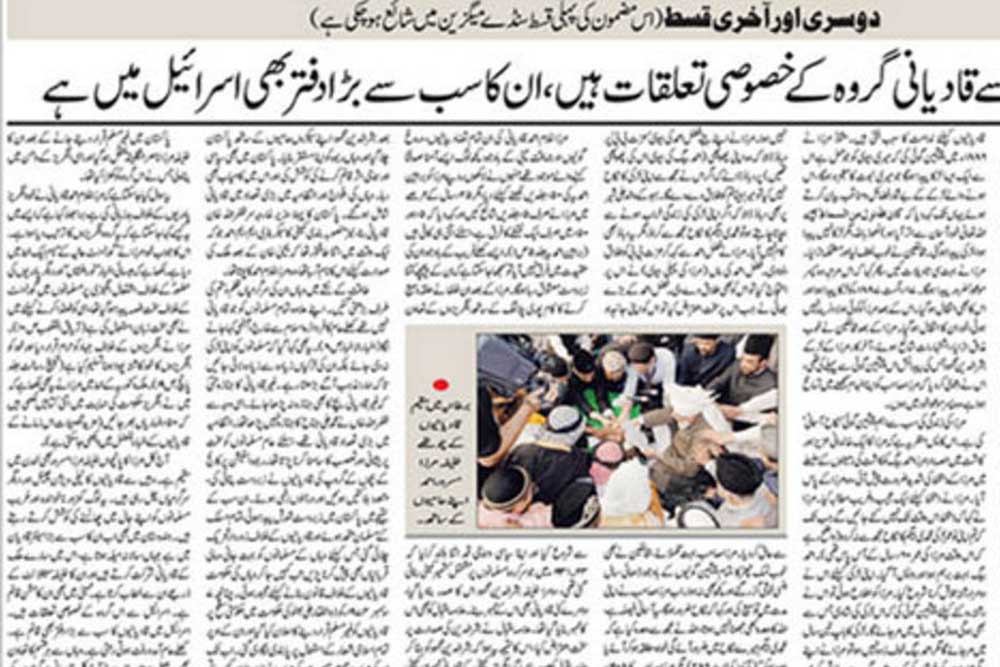 In a frontpage report on August 5, Roznama Inquilab introduced alarm in the minds of Muslims that the 2011 census report has accepted Ahmadis as Muslims. It added: “With regard to the 2011 census, this sensational revelation has emerged that in this report Qadianis have been registered as Muslims.” Although Narendra Modi was not the prime minister of India when the 2011 census was conducted, the Urdu daily declared: “Qadianis accepted as a sect of Islam by the Modi government.” It argued that “only Sunnis, Shias, Bohras and Agha Khanis were considered different sects of Muslims” before this census report.

There has been a long-standing consensus among moderate Islamic scholars that various groups who describe themselves as Muslims should be treated as such. However, a network of Islamic clerics, who are part of an international movement known as Khatm-e-Nabuwat (the End of the Prophethood) funded by Saudis, are engaged in what can be described as “Islamic racism” against Ahmadis – a form of discrimination deriving from religious beliefs held by some Muslims against other Muslims. These clerics accuse Ahmadis of not believing that Muhammad was the last prophet. Contrary to this, Ahmadi Muslims do believe that Muhammad was the last prophet, but they also believe that Allah communicates with saintly figures, a point Sufi mystics too believe.

It was under the influence of such clerics that the Pakistani state cemented this form of faith-based racism by enacting a law that declared Ahmadi Muslims as non-Muslims in 1974. It was first time in history that lawmakers of any country were given power to legislate on the religious faith of others, in this case by the so-called secular leader Zulfiqar Ali Bhutto. Today, in Saudi Arabia, Pakistan, Indonesia, India and many other Muslim countries, Ahmadis are pejoratively dismissed as Qadianis because their spiritual leader Mirza Ghulam Ahmad (1835-1908) was born in Qadian, in present-day Indian Punjab.

On August 10, a group of Islamic clerics, united under the banner of the Majlis Tahaffuz-e-Khatm-e-Nabuwat (MTKN), organised a protest march in Hyderabad against Ahmadi Muslims and demanded that the Indian government stop treating them as Muslims. This line of thought advocated by the MTKN is a threat to the pluralism of India and militates against our civilisational ethos of co-existence. It also underlines the fact that most such Islamic clerics do not believe in moderation and co-existence with different belief systems.

It also explains that Islamic clerics view themselves as lawmakers and cops out in streets to enforce, like the Taliban, their own version of Shariah. In September 2011, an exhibition on the Quran’s translations in 53 languages organised in New Delhi by Ahmadi Muslims was shut down after Imam Bukhari of Delhi’s Jama Masjid led a violent protest. Instead of offering security to the organisers, the Indian state, unable to manage law and order, surrendered before the Bukhari-led goons. Such surrenders by the Indian state encourage Islamist forces, threatening our democratic values of free speech, pluralism and right to peaceful assembly.

Critcising Justice Katju for defending Ahmadi Muslims in terms of the religious freedom available under the Indian Constitution, Roznama Urdu Times wrote: “Is it religious freedom to interfere in the religious affairs of others and to play with their religious ideologies?” The Urdu daily, acting like a judge, asked Ahmadis “not to name their faith as Islam and not to call themselves Muslim based on this faith.” Quoting Islamic clerics, it also noted that Muhammad Iqbal, the Islamist national poet of Pakistan, had demanded that Ahmadis be declared a non-Muslim minority, a point that was made law in Pakistan in 1974. As a result, Pakistanis, even journalists, are prohibited from calling Ahmadis as Muslims because they can land in jail.

Of all Urdu dailies, Roznama Inquilab – which is part of the Mid-Day group of papers – has continued its tirade against Ahmadi Muslims. On August 19, it published more than half-a-page article written by Maulana Khalid Saifullah Rahmani, a cleric known for feeding religious orthodoxies into the minds of Muslims. The opening words of Rahmani’s article are: “The enemy forces are waging invasions against Islam and Muslims from different sides.” Then he goes on to say that these forces have adopted “two paths for intellectual invasion” – the first being to show Islam without weight and substance, and the second being “to present those people as heroes who have caused damage to Islam.”

“Similarly, an unpious attempt has come from the Indian government [to consider Ahmadis as Muslims],” Rahmani notes and opposes any reform in Islam saying: “Insofar as modification and change in Islamic Shariah is concerned, then the Shariah has reached its completion.” Which means that there will not be any reform in Islam. To justify his obscurantist interpretation, he quotes many Quranic verses and hadiths (traditions of Prophet Muhammad), notably the Verse 3 of the Quran’s Chapter 5 in which Allah says: “Today I have perfected for you your religion and completed My favor upon you and have approved for you Islam as religion.”

In its editions of August 21 and 22, Roznama Inquilab published a two-part particle which together runs into more than a full page. The article, written by Mehmood Ahmad Khan Daryabadi, disparages Mirza Ghulam Ahmad, the spiritual leader of Ahmadi Muslims, and devotes several paragraphs to his alleged sexual life. While one is free to criticise any spiritual leader, the author introduces conspiracy theories about Ahmadis into the minds of the Urdu newspaper readers. For example, the second part of the article is titled “The Qadiani group has special relationships with Zionists; their biggest office is in Israel.” The author also tells Muslim readers that Ahmadis often visit Israel, as if doing so is sin in Islamic Shariah.

Here is why the Indian government must take such writers seriously. One, these clerics are funded by Saudi money and it is essential to investigate their connections with foreign organisations. Two, such articles in the Urdu press effectively declare a Muslim as murtad (expelled from Islam) or kafir (infidel), thereby inculcating the jihadi idea among innocent Muslim minds that such persons are wajib-ul-qatl, eligible to be killed as per Shariah. Three, they feed conspiracy theories among Muslims, notably that Jews are conspiring against Muslims. Four, such writers challenge India’s civilisational ethos of pluralism and co-existence, and therefore constitute a long-term security threat. Five, these clerics are immediate threat to India’s religious harmony; for example, Rahmani’s article describes Ahmadi Muslims as “the wolves coming in the skin of goats.”