Why Donald Trump is Good for India

His America would leave India with no alternative than to give up complacency, fend for itself and safeguard its extended interests 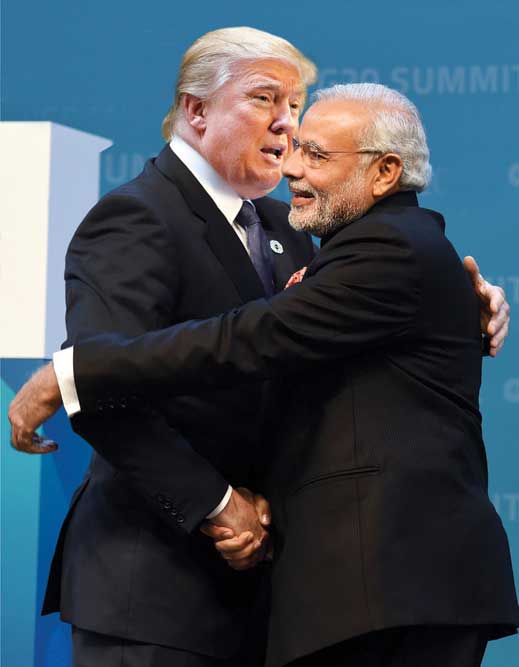 NOTHING IS MORE dreaded by liberal America than the potential presidency of Donald J Trump. He means to blow up the foundations of the existing global order along with the current set of US foreign and military policies. Notionally ‘Republican’ in his ideological moorings, Trump has declared he will tear up all free trade agreements, end refugee, immigrant and even visitor flows into America from nations “compromised” by “radical Islam”, including France and Germany, and, in order to generate well-paying jobs at home, stop US companies from outsourcing work offshore. Most significantly, his government will require, he says, treaty allies and strategic partners to pay their “fair share” for the military protection provided to them. Trump will terminate alliances, including NATO, since he perceives these as vehicles for allies to free-ride on security accorded by the US that drains its wealth and saps its spirit. Americans have always believed that ‘there is no free lunch’; Trump has extended this principle to assert there’s no free protection either.

International security arrangements are protection rackets, after all, and, one way or another, beneficiary countries do end up paying. Tokyo coughs up what it delicately calls ‘omoiyari yosan’ (compassion monies) amounting to several billions of dollars annually for the US military presence in Japan. It is armed security this country could well do without if the ‘peace constitution’ imposed on it by the US did not prohibit the Japanese from gaining militarily self-sufficiency in the first place. If it is amended, Japan can acquire nuclear weapons within weeks. It is a direction Trump has urged not just Japan but also South Korea to take.

Washington’s looser, more laissez faire attitude to nuclear self- defence and non-proliferation should ease fears of possible US- led sanctions and thus liberate New Delhi from its self-imposed America-placating strictures, motivate it to resume underground testing, and obtain a versatile arsenal by filling it with proven and credible nuclear and thermonuclear weapons of various yield-to- weight ratios. More consequentially, it can arm Vietnam with nuclear missiles as payback for China’s doing the same with Pakistan. India, Japan and Vietnam armed with such weapons would effectively ring-fence China. If that doesn’t sober it up fast, nothing will. Nations on the periphery of China will find Beijing becoming more receptive to equitable solutions for its border dispute with India and for others in the South China Sea and Senkaku Islands. Chinese leaders will have to worry that any show of bellicosity may push more adjoining countries to seek nuclear empowerment.

Prime Minister Narendra Modi gets along well with US President Barack Obama. He may get along even better with Trump—and then again, perhaps not—because they seem to be cut from the same cloth in many ways. Both are self-centered and share the same personality traits. The Republican Party presidential candidate has confessed, for instance, that he consults only himself when it comes to foreign policy matters. “I’m speaking with myself, I know what I’m doing,” he told an interviewer. “I listen to a lot of people… But my primary consultant is myself and I have a good instinct for this stuff.” Personal instinct and gut-level feelings are also what Modi banks on and which take precedence over the advice of experts and professionals. Trump’s boast, moreover, that he is able to do this because, as he put it, “I have a very good brain”, has shades of Modi’s preening reference to his own “56-inch chest”.

Trump’s neo-isolationist stance, however, packs the potential for the most lasting effects. With him implementing punitive policies, withdrawing the US behind Fortress America, and pulling up the drawbridges, international institutions such as the United Nations and economic forums such as the G-20 will become defunct, and the Indian Government will face a world bereft of the comfortable certainties of the past. With no assurance of an economic safety net or security shield, it will be compelled to look out for the country’s interests, muster the economic, military, technological and industrial resources necessary to fight off China or any combination of rivals and adversaries on its own. Should New Delhi relapse into its old habit and ask Washington to act as rescuer, Trump will demand that India sign up as a treaty ally, and, of course, pay for any military deployment.

New Delhi has been too complacent for too long, confident that in any dire situation an extant great power will rush to India’s aid. India’s big power rhetoric aside, its foreign policy has been like that of a cripple on foreign crutches, or like a pepper vine needing to wind itself around a sturdy tree to climb and prosper. In the 1950s and 60s, India relied on the US and the Soviet Union; in the following two decades, exclusively on the Soviet Union; and in the new century, on the United States. Trump will kick the crutches from beneath the Indian Government’s shaky worldview and mindset. Worse may follow in the economic sphere. Trump’s populism has been his winning card. He has promised that he will bring industry and jobs back to the US. This he means to do by cutting off access to the American market of those countries enjoying what he deems to be unfair advantages—in terms of hidden subsidies, tariffs and preferential treatment of home companies— and by curbing the outsourcing of work to foreign shores.

Globally, India’s biggest comparative advantage vis-à-vis other countries is in the Information Technology (IT) and IT-enabled services sector. It accounts for 67 per cent of the $124-130 billion market pie, employs 10 million people and is expected to grow to $350 billion by 2025. The trouble is that this vast edifice—a prime advertisement for a globalised and modernising India—will come crashing down if access to the American market is curtailed and H-1B visas are stopped. These visas permit Indian firms to send engineers and technicians to work in the US on Indian wages— Trump’s reason for shutting down this business altogether.

This industry is a vehicle of middle-class aspirations, and since the late 1990s, New Delhi has been very mindful of keeping the US door ajar for it and courting the votes of this burgeoning section of society. Getting close to America was an aim of the governments led by AB Vajpayee and Manmohan Singh, as it now is of the Modi Government. They have striven to forge a ‘special relationship’ with the US for another reason too: a ‘strategic partnership’ as a security hedge against an aggressive China.

THE HISTORICAL RECORD of countries seeking a ‘special relationship’ with the US, however, is not good. Winston Churchill as wartime British prime minister, and in his second term at 10 Downing Street in the early 1950s, discovered that it meant Britain being treated as a supplicant, a second-rate power, and having to tolerate unending slights. A Trump-led America will be even more insufferable in these respects, and falling in with the US may mean swallowing one’s pride and accepting insults and supercilious behaviour. Then again, recent policy trends suggest the Indian Government may not be averse to becoming a subsidiary power.

Even so, assuming there are limits beyond which the Indian people won’t accept the belittling of India, the country will be left with no alternative than to fend for itself and safeguard its extended interests. It will be a signal departure in that India will, per force, have to discard the habit of leaning on foreign countries for anything, ruthlessly pare the government and the public sector, task the private sector with the bulk of economic effort, including achieving self-sufficiency in armaments, and, with regard to foreign and military policies, insert steel in them, make them disruptive, reorient Indian diplomacy towards realpolitik, and enable India to emerge as an independent power that friends and foes alike fear and respect as much for its clout as its unpredictability. But for these benefits to accrue, Americans first have to elect Trump as their president.