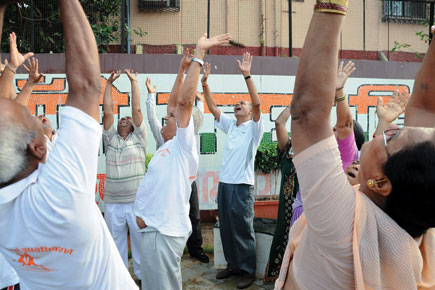 
Laughter is not always the best medicine, or at least that is what the Shirsat family in Kurla would have you think. Irritated by the activities of a laughter club outside their home every morning, they went to court, which has now asked the police to solve the problem.

The travails of Vinayak Shirsat, the 78-year-old petitioner, originate in a jogging track laid two years ago near the building where he resided. Seven months ago, a group of 15 to 20 people started using the corner shade there to conduct ‘Laughter Yoga’ sessions. The Shirsat home resounded with laughs every morning and they didn’t find anything funny about it. Their petition states, ‘Clapping is followed by loud and vigorous spells of laughter. One of the members of the said association starts shouting loudly between each spell of laughter, “Zaban nikalke, kaan pakadke, zor se, aur zor se, zor zor se”. This goes on for about 20-25 minutes.’

On 20 December last year, Shirsat suffered a vertigo attack and was advised rest. According to him, the loud daily laughter outside his home was a hindrance to his recovery. His petition states that he even had to be admitted to hospital because of it. That was when they decided to go to court. A petition was filed against the State of Maharashtra asking for their fundamental right to dwell in peace. “This is a form of aural aggression and we want to make it stop,” says Veena Thadani, Shirsat’s lawyer. The petition also points to the inefficiency of the police, which didn’t take action despite repeated complaints. Recently, during a hearing, the Bombay High Court ordered the police to solve the problem.

Prabhakar Naidu, treasurer of the Sheetal Talab Joggers Association, under whose aegis the laughter club runs, says that the police have been keeping a watch on them for the last two months. “They have been silently observing us and checking decibel levels, but they haven’t found it necessary to stop us,” he says. Members of the laughter club say they had no idea about the court case until they read about it in the papers. A large number still turn up for their daily shot of laughter. “It’s public property after all,” says Flory Leitao, one of the laughter club members. The hearings are still on, and the police will offer their defence on 28 June.