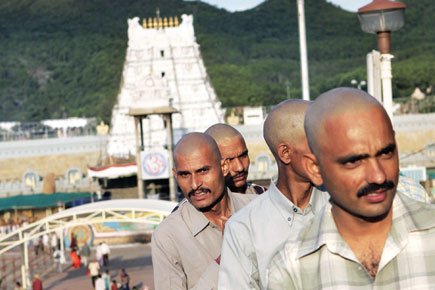 Hinduism’s richest shrine just got richer by Rs 133 crore. That’s the revenue it earned from auctioning shorn locks offered by devotees at the hilltop Tirumala-Tirupati Temple in Andhra Pradesh.

Tirumala Tirupati Devasthanams (TTD), as the shrine board is known, is known for devotees lavishing expensive jewellery, costly stones, cash and locks in gratitude to the presiding deity where the waiting period for a few seconds’ in the sanctum sanctorum stretches for hours. The TTD has been auctioning human hair for decades, but it was a clique of middlemen who were raking in the bucks. This year, the board notched up a first by starting an e-auction, which fetched the shrine board Rs 30 crore more than it had the previous auction. There were five varieties of hair up for grabs: all were graded for their texture, colour and length. There was also a separate category for grey hair. The hair ends up in wigs, coiffeur trims and false hairpieces made in Hong Kong, Japan, Singapore, Malaysia, the US and Western Europe.

The auction is mostly an annual affair, and the board stocks at least 100,000 kg of good-quality hair before calling for an auction. At this year’s e-auction, the available 11,500 kg of grade I hair was quoted at around Rs 20,000 per kg and fetched Rs 23.25 crore, while the lowest quality locks were quoted in the range of Rs 77–80 per kg and earned Rs 2.31 crore.

The hair, weighing 465,000 kg in all, fetched the board an additional 27 per cent over the previous conventional auction. It was a windfall, considering that at every auction, the board made just about 2 per cent more than the previous bids, thanks to organised middlemen.

LV Bhaskara Reddy, the board’s financial advisor and chief accounts officer, says that the entire process of electronically auctioning human hair was carried out in a transparent manner, with nearly 49 bidders from across the nation taking part in it on 22 September. To eliminate middlemen who try to undercut the board’s share and manipulate prices, TTD decided to go electronic. Reddy says the existing stock of human hair was inspected by a government certification agency between 12 and 21 September, before it received an approval.