Meet the man who maintains the city’s iconic clocks 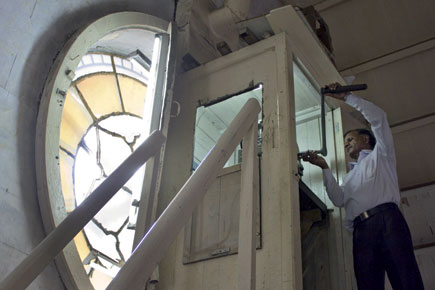 Meet the man who maintains the city’s iconic clocks


Around four years ago, a large clock on the façade of Mumbai’s Chhatrapati Shivaji Terminus broke down. The clock, built by the firm Lund & Blockley, has been part of the railway station ever since the latter’s completion in 1888. It is 10.5 metres in height, operates with an apparatus of six pulleys and steel cables and a large cylindrical weight of 175 kg, and twice every week has to be wound like any mechanical clock.

It was the first time that the clock had given any major trouble. It started to slow down at first. Then one morning one of the cables snapped and the 175 kg of weight came crashing down into the room below. The room was empty and no one was injured. However, the repair work that ensued—fixing a new cable, hooking the weight back, and changing some malfunctioning parts—was to take around a month to complete. During this time, the clock was to remain non-functional.

However, one Central Railway employee wouldn’t let that be. BK Jadhav stationed himself behind it every day. Every five or 10 minutes, he would manually move the clock’s hands so that people would not realise it had broken down. “How could I let it be? It’s never stopped working,” he says.

Jadhav is a TCM or Telecom Maintainer by designation. TCMs look after the maintenance of railway phones, station announcement systems, telegraph lines, etcetera. Apart from the clock on the façade, he has another Lund & Blockley clock, even larger (14 feet in height), under his charge. There are also 22 smaller tall-case clocks, made by the firm John Walker, some as early as in 1857, in the chambers of Central Railways officials.

Jadhav winds the long-case clocks every morning and the two larger clocks twice a week. Whenever he is free, he climbs up to the attic that houses the clock on the façade and spends hours there. Jadhav is due for retirement in another four years. He has heard that after his retirement the maintenance of the clock may be handed over to a private entity. “But I think I will ask [the authorities] if I can continue to work here,” he says. Last year, he was also given an honorary award by Central Railways for ‘maintaining heritage’.