Things We Do to Lose Weight 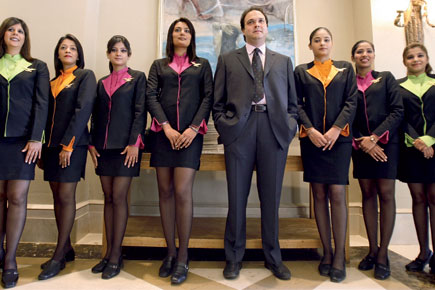 
Indian domestic airlines have been taking various steps to shore up finances this year. Many now permit only 15 kg of free baggage, as opposed to the previous 20 kg. An extra sum is charged for pre-booking seats in the first two rows or near emergency exits. Another low-cost airline has come up with a new idea which seems a little bizarre. GoAir will stop hiring male flight attendants to reduce load and thus save fuel.

This is one of a series of measures that GoAir is taking, which include reducing the number of inflight magazines and filling potable water tanks only up to 60 per cent capacity. Explaining the reason for doing away with male flight attendants, its spokesperson says, “Men are by nature heavier in comparison to women. Every male flight attendant will be at least 10 to 15 kg heavier than his female counterpart.”

GoAir’s CEO, Giorgio De Roni, declined to comment for this article. But late last month, he told The Times of India, “The rupee’s fall has hurt the industry badly. All major expenses —aircraft leasing, spare parts and fuel costs—are linked to the dollar. The fall in the exchange rate of the rupee costs us Rs 30 crore on an annual basis. We are looking at every possible way of cost-cutting to remain profitable.” The airline is expected to induct about 80 new aircraft over the next few years, each of which will require several new flight attendants.

GoAir’s spokesperson, however, points out that the steps being taken by the airline are not new and that most airlines are doing similar things to reduce weight onboard. Still, most male flight attendants in India are aghast to learn of the decision. A male flight attendant who quit his job at Indigo to work with another airline questions the rationale of such a decision: “GoAir uses Airbus 320 aircraft. On an average, every flight will have four crew members. If even one of them is male, will it make such a difference to aircraft weight? And, anyway, is such a step practical? What if a passenger turns violent on a flight and needs to be subdued? What if he develops a condition for which he will be embarrassed to approach a female staffer?”