The Nuisance of Bird Photographers 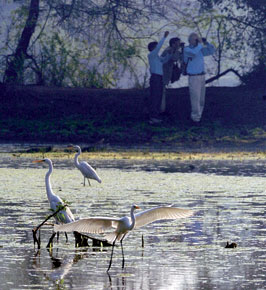 
Hesarghatta Lake, which is situated around 30 km from Bengaluru, is a biodiversity hotspot. Ever since it turned dry in 2009, its vegetation is undergoing a transition, and it has started to attract a number of birds that prefer grassland or marginal wetlands. It is estimated that around one third of all birds found in Bengaluru can be found here, and some, like the Pied Harrier, are rarely spotted anywhere else in India.

However, as a recent study shows, another type of visitor has also started to frequent the space. And its presence has come to adversely affect the region’s ecosystem. In a study titled ‘Ruining the ecology of Hesaraghatta Lake: the role of bird photographers’, a group of ecologists and researchers detail the damage caused to the region by bird photographers.

According to the analysis, conducted in December 2012 and published on Conservation India, a non-profit portal that provides information about wildlife and nature conservation, 43 km of permanent tracks have been made by cars of photographers on the lake bed, harming the vegetation of the region. The study also highlights how photographers chase birds in their cars until they are exhausted and cannot flee. On an average, 20 cars visit the spot every day and spend three-and-a-half hours. The authors write, ‘Each vehicle was observed to drive at least five times in the entire study area. Some of these vehicles were driven at visually estimated speeds of 40-50 kmph to get to a perching bird which was then stalked carefully at speeds less than 10-20 kmph… Whenever a vehicle stopped near a bird, four to five vehicles converged on to the spot and circled around. If the bird flushed, there would be a frenzy to reach it first.’ In doing the study, the researchers also came across a rare species of butterfly called the Lilac Silverline. Protected by the Wildlife Protection Act of 1972, this butterfly species was last spotted in India 103 years ago, reportedly. But vehicle movement has crushed several of these butterflies’ host plants.

According to Dr MB Krishna, an ecologist and one of the authors of the report, the researchers had long been hearing complaints about the photographers. “I have even heard that photography classes are held here,” he says over the phone from Bengaluru.“There are also rumours, although we did not come across it during our study period, that some photographers offer snakes to birds of prey. There is nothing wrong in taking pictures, but it has to be done responsibly.”