The Barber’s Other Business

The next time you’re in Bangalore, ask him for his special taxi 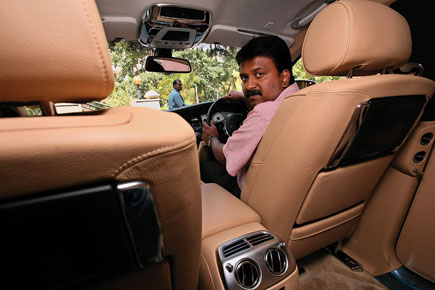 The next time you’re in Bangalore, ask him for his special taxi


Ramesh Babu, who works at a nondescript salon at a high-street club in Bangalore, spends much of his day cutting hair. An unassuming man who joined the family business, he explains, “I am a barber by profession.” Few know that when he isn’t styling hair, Babu tends to a fleet of luxury cars parked in his garage.

He could be India’s richest hairstylist in terms of assets, thanks to his ‘part-time’ business of running a luxury car rental company. (He says he barely breaks even, so being a hairstylist helps him keep the kitchen warm.)

Babu, now 40, came up the hard way. His father died when he was nine, setting off a long struggle that eased when Babu earned a diploma in electronics. Through this time, Babu had worked part-time at the family salon started by his grandfather. Even after a formal education, he was drawn back to the business. “That was in 1989, when I earned Rs 5 for every haircut.” A few years later, he aped an uncle, bought a Maruti van and rented it out to a company.

The returns were encouraging, and they supplemented his income from the salon, where he often worked till as late as 3 am. “If regular customers walked in late, I could not refuse them,” he shrugs.

As his reputation grew, so did the car rental business. By the 1990s, he had a thriving taxi operation. Soon, though, he had to move his salon to a club. “I spent the mornings and evenings at the salon and the afternoons running the car business.” He manages to make time for his three attention-hungry kids.

In 2004, when an opportunity beckoned to get into the luxury car rental and self-drive business after the government opened up the tourism sector with attractive subsidies, he changed gears. Ramesh Tours and Travels hasn’t looked back since. At last count, he owned 154 cars, vans and mini-buses, including 42 imported vehicles—a Rolls-Royce Silver Ghost (he pays an EMI of Rs 7 lakh), Mercedes C, E and S class and BMW 5, 6 and 7 series. He has a fleet of imported Mercedes vans and Toyota mini-buses. “This is more of a passion,” he says. As for being a barber, “I will continue to be one as long as my hands are healthy.”