Story of a Gang Rape

How a victim’s resilience helped solve the case quickly 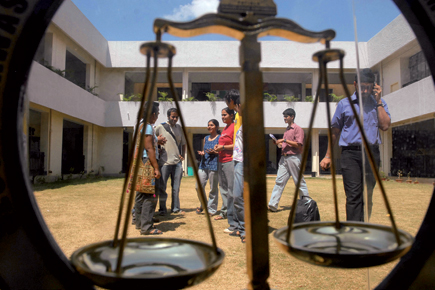 How a victim’s resilience helped solve the case quickly


On the night of 13 October, a third-year female National Law School student was sitting in a car on the Bangalore University campus along with a male friend when eight men descended on them. They dragged the two in different directions. The girl, a Nepali, was taken deep into the mini-forest where they took turns to rape her. Her friend ran away.

The girl fumbled around and found her way back to her campus, which was nearby. Once there, she narrated her ordeal to fellow students, who took her to the local police station. The police were reluctant to register the case but after an uproar from female hostelites of the university, citizens and the media, they started to investigate.

The victim gave detailed descriptions of each of the gang members, what they were wearing, the axes and knives they were carrying and their facial features, especially of one buck-toothed member. It became apparent that the assailants could be sandalwood thieves who had been previously arrested for prowling the campus. She pored through more than 500 photos in the crime files.

“The student is brave. She was with us all the way. Without her inputs, we could never have caught them. She also went through umpteen identification parades fearlessly,’’ says city Police Commissioner Jothiprakash Mirji. The breakthrough came once the student sat for hours with a sketch artist who drew life-like portraits of the rapists.

Armed with these sketches, policemen visited nearby tribal settlements where sandalwood thieves were said to be residing and unobtrusively took photographs of several men. They also visited the Ramanagaram district commissioner’s office, 45 km from Bangalore, and matched the sketches with photographs in the electoral photo identity cards. Finally, they pinpointed the eight before arresting seven of them.

The victim told a classmate that initially she was disappointed by the police’s lack of concern, but she was determined to get justice. The accused have confessed. They said they were roaming around looking to chop sandalwood trees when they chanced upon the couple. Earlier this week, DNA tests that were matched with the girl’s swab samples confirmed the seven as the rapists.