Music, headbanging and that addictive high. Guess how much the damages are? 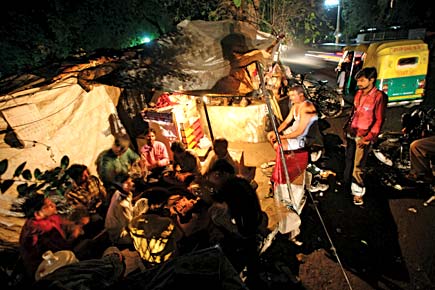 Music, headbanging and  that addictive high. Guess how much the damages are?


Jagdish Mandal is 60 years old. He works as a driver for someone in South Delhi. He lives an unremarkable existence. Except on Tuesday nights, when he becomes boss to a bunch of ‘economically weak’ people like himself. His job is to ensure that the group not only has a lot of fun, but is also seen to be enjoying itself. The group assembles by the roadside, near Hauz Khas monuments in Delhi, between 8.30 pm and 11 pm. All that they do here is sing and bang small cymbals (manjiras) and dholaks. There is no dancing, because there is no space to dance.

There are no designer drugs, there is no air-conditioning and no food or drinks are served. But the occasional pot and the mandatory prasad are on the house. Where this is most different from a routine rave is that, nobody hangs around in a corner. Everybody is here to sing, perform. Not because he can but because he wants to. And all are welcome.

This is what typically happens here, about every ten minutes. Songs are sung to a predictive rhythm. They sing only bhajans, but the lyrics don’t matter much. Each new song starts slowly, even as you want to reach the climax quickly, again, which you remember from the song that ended just three minutes ago. But this one, you think is too boring. In desperation, you think, Jagdish ups the beat—slightly. Everybody catches on. The manjiras get louder…they can get as loud as your hands can bang them but you can’t go faster than the boss. However, unless you are part of the in-group, the beat will eventually leave you behind. You smell it coming, again. The beat is fast now…you can’t keep pace. You are screaming, writhing and head banging. When it is over, everybody thank the gods and this song is over. You are thankful because you want to relax a bit before the next one begins.

It is very easy to enjoy yourself here, but very difficult to belong. But don’t worry. These strangers won’t mug you. You’re worth much more to them than a simple wallet or even a stuffed money belt.

Mandal’s mandali is not a novelty. If you have been to any small town or village in north India, you know what a Ramayan or kirtan mandali is. They assemble under trees or inside temples and sing religious songs for three to four hours once or twice a week. If you are too embarrassed to sit with the plebeians, but still want the experience, you can call them to your house or the next party or jagran you may be organising—for a charge of course. In the villages, the Ramayan and Ramcharitmanas are the major source of their songs. When invited to a ‘function’, they do everything—all-night jagrans, saain sandhyas, ghazal nights. There is big money in these events, and you wonder what keeps this group coming every week. Is it the prospect of money or something else?