Out of the Box

Bangalore’s Heritage Museum of Packing charts the evolution of packaging 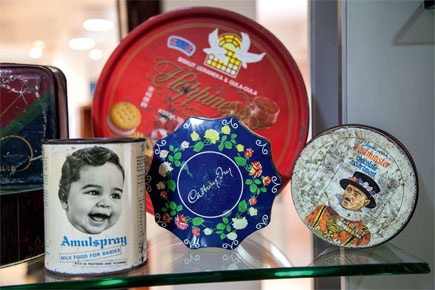 Bangalore’s Heritage Museum of Packing charts the evolution of packaging


While we rip open packages and discard the skin to get to what’s inside, a museum in Bangalore has collected various types of packaging to showcase its evolution. The Heritage Museum of Packaging is one man’s tribute to his business.

Vimal Kedia, managing director of Manjushree Technopack in the industrial suburb of Bommasandra in Bangalore, has nearly 2,000 specimens of casing, some with their contents, collected from across the globe. It keeps growing as he scours kabadiwallahs (junk shops), antique sellers and dealers of bric-a-brac.

The museum has some absolute gems—metal body still cameras encased in leather, a gold spoon that Nescafe offered as a promotion in the Middle East, a petrol lighter that can be ignited by flicking a stone near the nozzle that lights the wick, and a 1955 Ronson-make hair dryer from the US which is the size of a conventional vacuum cleaner and had to be strapped onto a woman’s waist. There also are radios, instrument cases, women’s powder boxes, soft drink cans, perfume and liquor bottles, biscuit, chocolate and cigarette tins, lamps, salt and pepper shakers, gramophone record covers and even typewriters.

The museum attempts to trace the origin and evolution of packaging material from wood, metal and glass to paper, cardboard and finally to the all-pervasive plastic. “Consumers don’t realise that packaging material, even a Pet bottle of breakfast cereal, goes through a research and development and sampling phase often lasting two years,’’ says Kedia.

His collection, dating back almost 80 years, belongs to the consumerist era. There also are metal cash boxes and Victorian-inspired 20th century jewellery boxes made of mother of pearl and silver. A ceramic chemical urn rests in a corner of the museum. Back in the 20th century, it was the preferred mode to carry dangerous chemicals.

Wooden cigar cases and cigarette tins occupy pride of place, and take you back to status symbols of the past. There are cylindrical cans of John Players Special and Rothmans, designed to preserve flavour across long journeys over the seas.

“When I started, I did not think the collection would become this huge. Packaging is certainly an art,’’ says Kedia, whose firm is currently South-east Asia’s largest Pet bottle manufacturer.