Women in Lucknow take to airguns to protect their homes, children and themselves from the menace of rapidly multiplying monkeys 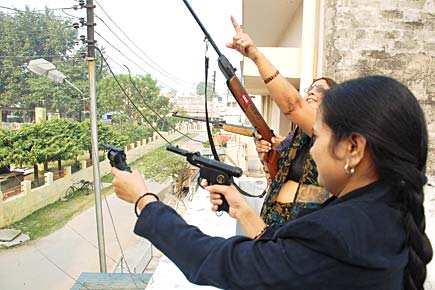 Faced with a serious simian menace, women in Lucknow take to airguns for protection


On Karwa Chauth, Mamta Pathak stood with her daughter and bahu on her terrace to catch a glimpse of the moon and break their fast. Pathak’s husband and son stood with airguns and sticks. To protect them from the monkeys.

For the past two years, Aliganj, like other parts of Lucknow, has been held hostage by monkeys. A seemingly harmless group of five primates have rapidly multiplied to 250. As a result, the women in the area, too, have taken to airguns. The safety of homes and wellbeing of children are duties that fall largely on women, so they think it is a natural reaction, however absurd they may look holding them.

At least 8 to 10 households here possess air rifles and pistols. Others get the toy guns sold on Diwali. The cost of an air rifle is a little under Rs 1,000 while the cost of rabies shots after a monkey bite is Rs 700.

Apart from raiding kitchens and refrigerators, the monkeys have also destroyed gardens. Pathak, a fond gardener, has lost all interest in gardening since the monkeys took over. The primates have also damaged call bells, parked cars, and ripped clothes left to dry.

“They open taps, climb on to terraces, open the tanks, jump in and do latrine-bathroom inside. We unknowingly used that water till it was brought to our notice,” says Pathak, also an active member of the colony’s housing society.

A few residents, senior citizens and children, in particular, bear scars of monkey bites. The colony’s children are not allowed to play outside without supervision, after a young girl on a cycle was recently chased by monkeys. In fact, children here are encouraged to watch TV after school. “Monkeys play in the park, not us,” complains 11-year-old Nivedita Dhavan.

Learning to operate an air rifle—right from lifting the heavy weapon and loading it with pellets to aiming and shooting—is no mean achievement for Kanchan Pandey, who never even lit a cracker before. “Each lady here is a Rani Laxmibai, she has picked up the gun for her protection,” says Pandey, practising her aim. “The airguns are meant to scare them. But if the forest department gives permission, we will start killing the monkeys,” says Pathak. “We want freedom from this constant fear. We are pious Hindus and worship Lord Hanuman, but these monkeys can’t possibly be forms of divinity. God wouldn’t harass us like this.”

Each night brings a new nightmare, says Pandey. Rival groups of monkeys take over homes, causing mayhem as they fight for leadership. “The ruckus caused by monkeys is like the sound of dacoits raiding a house. In the morning, we find blood and bits of fur left behind from the night’s attack.” Kanchan and her husband, weary of mistaking the monkey ruckus for thieves, recently ignored a similar commotion near their entrance, only to discover their cycle stolen. Pathak says, “The only solace we had was that monkeys will keep thieves away. Now, we can’t be sure of that, either.”