With no officials to do a headcount, captured monkeys languish in a municipal compound 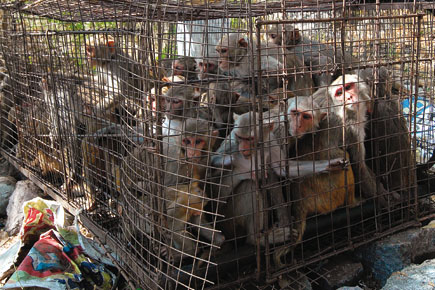 With no officials to do a headcount, captured monkeys languish in a municipal compound


Monkeys are the closest that nature got animals to human beings, and that’s not always a good thing. A visit to most tourist destinations is an introduction to self-trained monkeys adept at grabbing whatever they can from your hands. In urban India the monkey menace gets so serious that civic bodies have to plan out strategies to solve the problem. And this can get quite innovative. Monkeys in Delhi’s Raisina were scared away by leashed Langurs and their handler walking around. Langurs are expensive to procure and maintain. It’s easier to catch monkeys and release them in uninhabited areas. Which is what most small town municipalities do. Sometimes, though, it leads to odd results.

In Warangal, a town in the Telangana region of Andhra Pradesh, nearly a hundred monkeys, Bonnet Macaques, were rounded up. Warangal’s monkey problem is so serious that twice a year the municipal council gives out contracts to catch and release monkeys into nearby forests. The exercise is futile, as the animals invariably troop back into town. This time, however, instead of releasing them into the nearby forest, the contractor who rounded them up chose to keep the animals in the municipal compound. He was getting Rs 175 per monkey and would not let them loose without officials first making a headcount.

But the problem was that there were no local officials to do it. All of them were busy visiting villages to implement a state government programme. And so the monkeys, which included young mothers with week-old cubs, languished in a low-roofed over-crowded cage without food and water. They remained like this for a fortnight and it was left to an NGO to arrange food and water for the animals. The town suddenly discovered that it had a heart, and slowly the outrage of treating monkeys like this began to build up. Media reports grabbed the attention of the Chief Minister’s office which ordered that they be given nutritious food and medical attention before being released into forests. They were finally released after two weeks.

“I am sure they will come back like every time, but hope they’ve learned their lesson and keep to treetops,’’ says a member of the NGO.