He Conquered, She Feeds 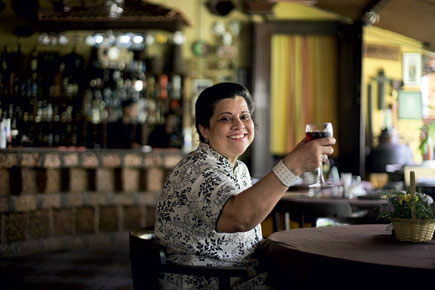 
Sixty-year-old Margarida de Naronha Tavora-Costa looks around the restaurant she owns. She calls out to an employee and wonders loudly about the Portuguese music being played. “Is there anyone in this restaurant at this time who understands Portuguese music?” she demands. At a shake of his head, she instructs him to put on Goan music. “People have to connect with a restaurant from the moment they walk in. Everything has to be right, and they will definitely come back,” says Margarida.

Nostalgia, nestled in the tranquil village of Raia, is like any other restaurant in Goa but for the fact that its owner is the 13th direct descendant of the Portuguese explorer Vasco da Gama. “In Portugal, my brothers and I are regarded as nobility. In Goa, too, there is a reaction from people who know about our famous ancestor, but for us it is all the same. We don’t wear our ancestry like a badge, but the discovery has made a small measure of difference,” says Margarida.

Her father was of Portuguese descent and her mother a Goan. While her paternal grandfather did tell the children about their famous ancestor, the family just laughed it off. However, when a historian in Portugal embarked on a mission to track the family tree of Vasco da Gama, he stopped at their door.

Margarida and her brothers are not very vocal about their lineage. A year or so ago, when there was talk of a commemoration of 500 years of Vasco da Gama’s visit to the state, Hindu hardliners threatened to launch a series of protests. They called the Portuguese explorer a plunderer and said that he had carried away precious wealth from Goa to Portugal. The then Congress government dropped the commemoration plans.

“Once we discovered our lineage, we had a big event to honour all our family members and relatives. There are about 20 families in Goa who are connected to Vasco da Gama, but they all live quiet lives. They do not want to get into any controversy,” says Margarida.

“The people in Goa should understand that the Portuguese will not come back.”