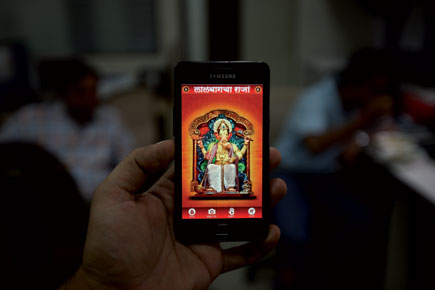 
Lalbaugcha Raja in Parel is the most popular Ganapati in Mumbai. Every year during the Ganesh festival, thousands of devotees throng this venue, often waiting in queues for up to 10 hours to get a glimpse of the idol. Last year, according to the police, millions of people visited the mandal during the 10 days of the festival. This year, however, a new method of darshans was introduced, one that did not involve waiting in lengthy queues. Devotees could get online darshans through a cellphone app.

Bharat Bhujbal, the brain behind the app and a member of the trust that organises the mandal, the Lalbaugcha Raja Sarvajanik Ganeshotsav Mandal, claims he came up with the idea after being moved by the devotion of people last year. “There were elderly people and young children in the crowd waiting for hours to get a darshan. I realised that there must be so many other elderly, young and infirm who want to get a darshan but can’t. That’s when I thought, ‘How about a mobile phone app that live-streams visuals of the idol?’” he says. Bhujbal proposed the idea to Ashok Pawar, president of the mandal, who agreed. “We also realised that this would even benefit devotees abroad and those who live in Mumbai but can’t make it to the mandal because of work constraints. Now, it’s all there, right in your hand. Click a few buttons and you get your darshan,” Pawar says.

Apart from live-streaming visuals from the darshan, the app provides photographs, videos of aartis and of celebrities visiting the mandal. So far, almost 2,500 people have downloaded the app. Bhujbal expects more downloads next year. Currently, it is only available on the Android platform, but an iPhone version will be made available next year.

The Lalbaugcha Raja mandal was established in 1934. Devotees also call it the Navsacha Ganapati (wish-fulfiller). Apart from the app, the mandal also has a Facebook page and website. Bhujbal says, “The idea of online darshans seems odd, I agree. But we need to keep in step with the times. And as long as people really mean it, online or offline, He will bless you and fulfill your wishes.”