Laxman Rao, a tea stall owner, has written 20 novels in Hindi, which is not his mother tongue 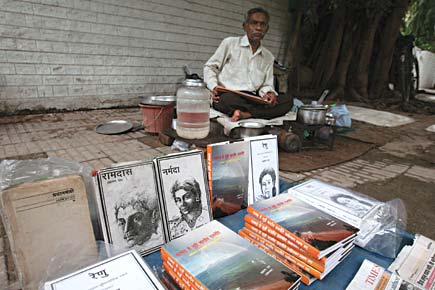 Laxman Rao, a tea stall owner, has written 20 novels in Hindi, which is not even his mother tongue


Sound of gurgling laughter emanates from the tea stall located on Vishnu Digambar Marg in Central Delhi. Surrounded by his customers is the owner of the stall, an unassuming Laxman Rao. It is evident that he is very popular. But there is something more to this man. In the night, Rao will sit down and write for three hours on one of his novels. It’s a craft which has made this tea stall owner pen 20 novels, of which eight have been published.

“I buy all provisions for the stall by 9 in the morning,” he says. “After that I visit schools and colleges to market my books.” His eager customers get a glimpse of him only in the afternoon when he sheds his crisp business-like persona to once again become a friend and advisor to them. “I devote two to three hours in the night to writing. It is only at that time of the day that I want to be alone with my thoughts and hence I request my family and friends not to disturb me,” says Rao.

His first book, Nayi Duniya Ki Nayi Kahani printed in 1979, took a look at the swift transformations taking place in the common man’s life. Rao usually draws from personal experiences while writing a book. For instance, Ramdas, which came out in 1992, was about a boy from Rao’s village who had drowned in the river. His latest, Abhivyakti, will soon be out.

Originally from Amravati, Maharashtra, Rao moved out in 1975 in search of better employment. “I used to work in a mill. After the drought I went to Bhopal. My friends had told me that to make it big in Hindi literature I should stay in a Hindi-speaking state for a while.” But Bhopal didn’t appeal to him and he shifted to Delhi where he created a platform on Vishnu Digambar Marg to sell tea. The writer in him was aching to come out and soon he began work on his first novel.

He went from one publishing house to another in a bid to get his novel printed. None of the publishing houses even glanced at his manuscript, some even told him that they would publish his book only if he gave them money. Rao, however, refused to let this disappointment break his spirit. He went ahead and published the books on his own.

Little did he know that his efforts would win him an invite to meet President Pratibha Patil at the Rashtrapati Bhavan. “I got a call from the President’s office at the end of July. I just couldn’t believe it. Pratibhaji had read my novel Renu, and was very impressed,” he says. The meeting which was only meant to last a couple of moments stretched on to 20 minutes.