An Appetite for Travel 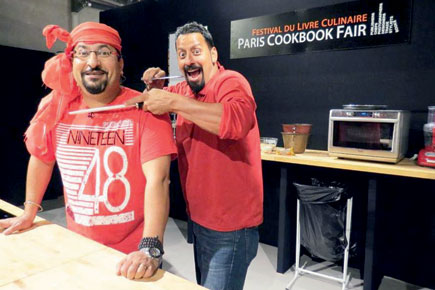 
Viewers first tuned into the NDTV Good Times show Highway on My Plate (Homp) in September 2007. Two reactions followed: first, relief that the show had nothing to do with road kill; second, an urge to get on the road themselves so they could sample all the food the show’s hosts, Rocky Singh and Mayur Sharma, were getting to sink their teeth into.

Rocky is an insatiable meat-eater, and Mayur, a defiant vegetarian whose diet and occasionally under-filled plate is the butt of Singh’s jokes. Together, they’ve travelled 80,000 km across the country in search of the best regional and street food that each state has to offer, from Nagaland’s fish markets to dhabhas near Chilika Lake. In the course of their journeys, they have sampled old classics like Lucknow’s galauti kabab, Amritsari kaali daal, as well as entirely new ones of their own making, like chilli prawn in Barkul and fresh guinea fowl off NH4 close to Pune.

A large part of the show’s success goes to Singh and Sharma’s infectious enthusiasm, endearing silliness and the massive appetite with which they lavish food that is generally good and always affordable. Dedication (and duty) to their appetite is not without consequences—they say they’ve put on 30 kg between them since the show began. But this is compensated for by the other sort of weighty consideration they just received: the 2011 book based on their show, Highway on my Plate: The Indian Guide to Roadside Eating, has won first prize at the Gourmand Awards in Paris.

“The reason they gave us this award,” says Mayur, “is that there’s a wealth of information in the book—we’ve written about 350-400 restaurants, and we’ve recommended four to five dishes from every place. So that’s a collection of 2,000 things to eat across the country.” This is the first Indian winner under the TV Celebrity (Rest of the World) category. Previous winners from India have mostly won for cookbooks, including in the categories of Health and Nutrition, Best Easy Recipes and Best Culinary History.

The show attracts fervent fans, who call themselves Hompers and regularly go on food trips together. “It’s amazing how the show has taken a life of its own,” says Mayur. Now, the book has too.