A Couple of Numbers

This husband and wife live off cricket statistics 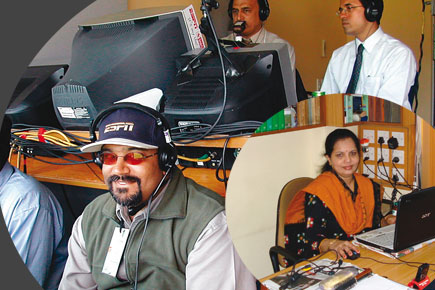 This husband and wife live off cricket statistics


Most Indian men might request their wives for a cup of tea during a World Cup match. Mohandas Menon could ask his better half, Valsa, for Zaheer Khan’s strike rate.

Mohandas is India’s leading cricket statistician. As usual, he will be on the broadcasting team of the host channel, whipping up stats for Sunil Gavaskar or Harsha Bhogle. Valsa, who has worked for Neo Sports and Sony as a statistician during cricket telecasts, will this time hold fort in their Mumbai home, feeding their programme with data or digging out facts if her husband calls from the commentary box.

“I was always interested in cricket,” Valsa says. “Earlier, I was an occasional assistant to Mohan. As he became a professional statistician, it became a full-time job for me too.”

Mohandas is a mathematics and economics graduate. Valsa has a masters in psychology. After their marriage in 1988, cricket statistics became their life. Mohandas says, “I grew up in the 70s on Sportsweek magazine. BB Mama was a famous statistician of the time and his stuff would appear in Sportsweek. That’s how the bug bit me.”

His big break came during the 1987 Reliance World Cup. “I was a Reliance employee. The company was inviting some former players for the tournament. One of the players on the list was Jim Laker. I told them Laker was dead. They realised I knew cricket and involved me in the tournament.”

The couple have a 21-year-old son, Anirudh. He is interested in cricket and statistics but does not want to make it his profession. “He is doing his MCA (Master of Computer Applications),” says Mohandas. “But now and then he mails me saying, ‘Dad, you missed this or that’.”

The hectic pace of a commentary box is exhausting but satisfying. “You have 15-20 seconds to fish out the information,” Mohandas says. Days when there are simultaneous matches in two venues are the hardest. The toughest commentator to work with? “Tony Greig. He squeezes everything out of you. But I enjoy it,” Mohandas says.

Even on holiday, at least one of them carries a laptop with their cricket data. If anything fundamental has changed in all these years, it is his response to an India defeat. “Earlier I would be severely disappointed if India lost. Now it does not affect me that much.”