Slip Away: Rumble in the Jungle 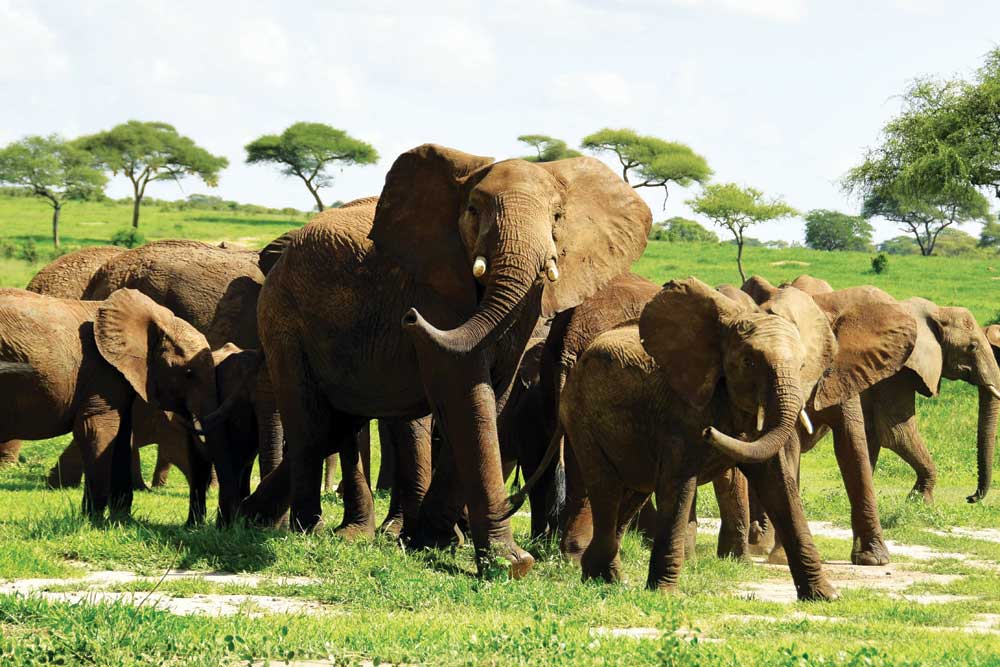 “Haraka haraka haina Baraka (nothing is accomplished if you hurry)”.

My guide-cum-driver, Johnson, affably chides me in Swahili. I do sound like an impatient 6-year old, wanting to know every 10 minutes if we are there yet. This gets me to disconcertedly concentrate on the cornflower blue skies and the lush rolling plains of Serengeti, speckled with wildflowers and wildebeests, as we make our way from Seronera in Central Serengeti to Bologonja up North. We are here to witness the most exciting chapter of the great migration – the crossing of millions of wildebeests across the River Mara. The July sun shines down the open rooftop of our 4×4, reminding me to zip up my jacket. It’s winter in the southern hemisphere and my summer holidays in Tanzania have just begun.

THE GREATEST SHOW ON EARTH

It is a journey that has been undertaken by millions for years. 1.2 million wildebeest along with tens and thousands of zebras and Thomson’s gazelles, move through the 1,50,000 square miles of Serengeti every year, between Kenya and Tanzania, following the rains. This thrilling journey, intertwined with courting, mating, birthing and killing by ravenous predators, is as exciting as any Hollywood Western. The most exhilarating part of this journey occurs between July and August, as millions of wildebeests brave their lives and limbs, fighting the crocodiles lying in wait in the Mara River, to cross over from Tanzania to Kenya.

We arrive in Ang’ata Bologonja Camp just before lunch. Built amidst wilderness, close to where the action is, it is a remote luxury camp with a handful of tents that gives you the experience of living in the bush, but with all the modern amenities. A delicious lunch and a bit of a stretch later, we start our drive to reach the nearest part of Mara River to catch the action.

1.2 million wildebeest along with tens and thousands of zebras and Thomson’s Gazelles, move through Serengeti every year

Rumour has it that millions of wildebeests have been teaming up for weeks near the steep banks of crocodile-infested Mara, looking for an opportune moment to cross over. A few brave souls have gone ahead and sacrificed their lives to the hungry crocs. The tension has reached its crescendo and it is the now-or-never moment, when the herd, in an act of defiance, finally charges ahead. We gape in awe, as the action, straight out of Nat Geo TV, unfolds before our eyes. Bloodbath and mayhem, rumpus and gore – millions of wildebeest surge ahead; the weaker ones succumbing to the snarls of the delighted crocs, while the lucky ones surviving another day and making it safely to the other side.

A VIEW TO A KILL

After yet another busy day in the bush, we spot a lioness strolling stealthily amongst the rolling grass. Her swag makes it evident that she is out for a kill, the only action we have missed so far. Our vehicle rolls and stops and rolls again, stalking the lioness, keeping pace with her. In the horizon, we can see a bunch of Topis and Thomson’s Gazelles, rooted to their spots, in a fright-or-flight mode, trying to decide if it is prudent to stay or slink away, while there is time. There is a palpable tension in the air – the predator and the prey measuring each other up, determining the next course of action. The lioness looks around, takes her position and then changes her mind. We, along with the gazelles, breathe again.

Wildebeest have not only crocodiles in Mara river to contend with, but also preying lions waiting for the kill

We soon spot another herd of wildebeests, along with some zebras. They must have been late for the crossing party and are on their way to the river. Or they may have decided that it is more respectful to fall prey to a lion than to a croc and, hence, have not followed the herd. Their wish is about to get fulfilled and so is ours. The lioness takes her position behind the grass, camouflaged from the unsuspecting herd. She crawls slowly and surreptitiously and pauses to take stock of the situation. It starts to drizzle and the herd looks disoriented. Wildebeests depend on their olfactory senses to move around and spot danger and when it rains, confusion ensues as they cannot smell a predator. In a blink of an eye, our lioness, taking advantage of the rain, is up and running. Zipping is more like it, as the herd is too stunned to react. Before they can make a getaway, the lioness has caught up. A bedlam follows and I am unsure who to root for. What seems like eternity, but is actually a couple of seconds, a not-so-fast and not-so-lucky wildebeest gets pounced on. His hapless friends watch from a safe distance as the lioness, after much struggle with the 100 kg strong wildebeest, tears his jugular vein and chokes him to his destined demise. Almost on cue, a bunch of cubs leap out of the bush, ready to join the party. The proud mother looks at her pride and settles down for their family picnic.

Good to know before you go

– Arusha is the starting point for most safaris in Tanzania.l Kenya Airways, Turkish Airlines and KLM covers the route from Mumbai/ New Delhi to Kilimanjaro International Airport, Tanzania.

– Visa on arrival for Indians. Yellow Fever Vaccination is mandatory to enter Tanzania.

– Game viewing is abundant throughout the year in the Serengeti eco-system. Follow the migration path and be where the action is. July-August is the best time to be there, with the river crossing.

– There are camps of different budget, but staying in a mobile camp, like Ang’ata Camps, helps, as they set up their site closer to the scene of action. They can also organise the safari, with a 4×4 and a dedicated driver-cum-guide, escorting you throughout your journey.